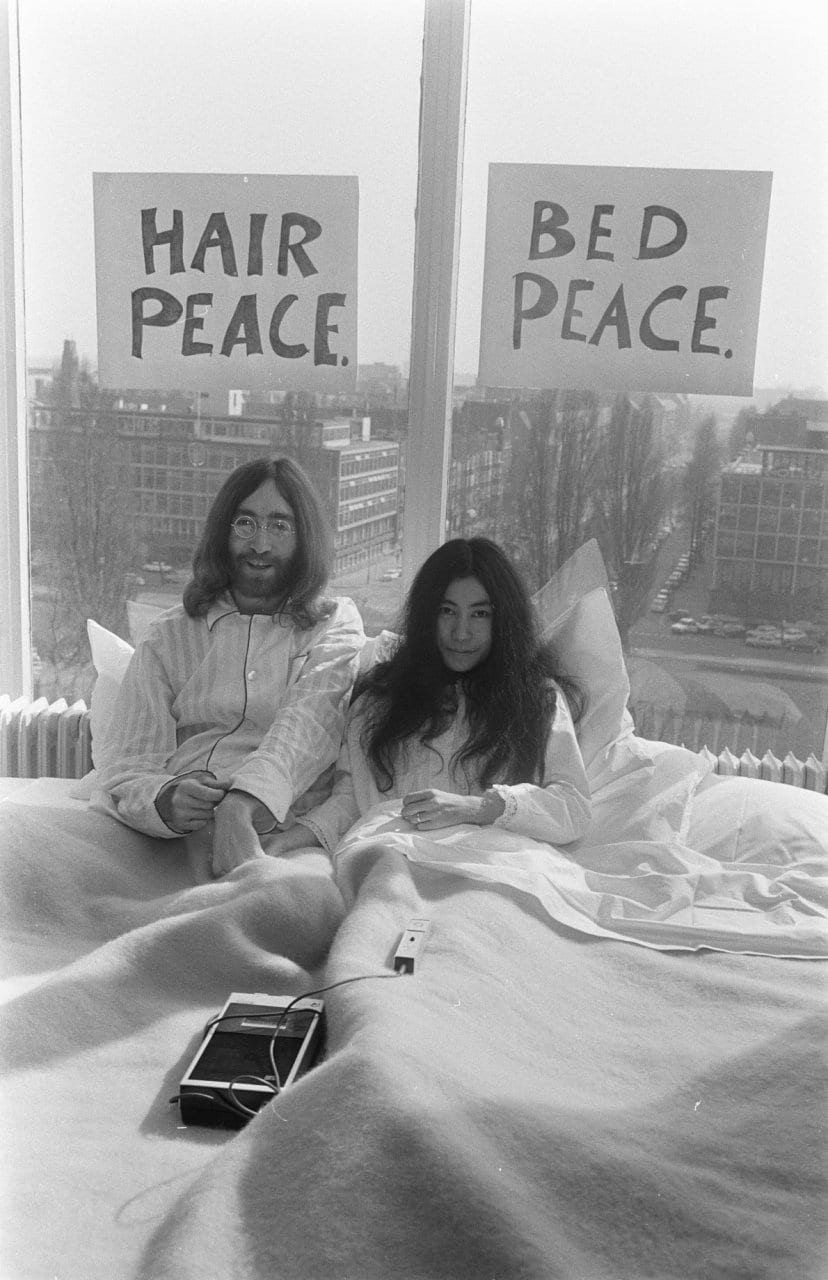 Launched a website at midnight on Sunday. Got two hours sleep.  Went to the scene of John Lennon’s famous ‘Bed-In‘ hotel room. Almost exactly 42 years ago that this event happened. Hard to believe.

It was part of a promotion from a local events company, they staged their own ‘bed-in’ to pay tribute to the event, and also kicking off publicity for their own event.

The room is pretty much as it was when the event happened, a few minor cosmetic differences, and the view outside the window is now different buildings, but the layout of the interior remains true to the event. Theres images of  John and Yoko lying in the bed, doing whatever they did around the walls of the room, and a special plaque on the door to the room commemorating the occasion.

The day was ok, I felt like a fish out of water, as I mostly do in these kinds of events…detached, nervous, just not ‘one of them’. Im not one of the sexy illuminated enlightened ones. Never have been. Too much of  a nerd. Too quiet.

I felt uncomfortable, but tuned it down to a background humm in my brain and got on with the job at hand, documenting the occasion.

Some notable moments included a naked ‘trail’ of bodies, perhaps 20 or so people, covering their ‘parts’ for modesty (or each others) starting on the bed and going onto the floor and across the room to the other side.  The assembled photographers (3 of them, no less) were creaming their panties over that one.

The day finished with a song, as all successful days should do. Two guitarists came into the room and gave a rousing rendition of one of Lennon’s songs, and the room lit up, 20 or more people crammed onto the very same bed that John and Yoko staged their peaceful protest for the worlds media.

The unusual event happened while I was packing to leave. The majority of people were packed into the main bedroom, singing with the guitarists. A jovial party-like atmosphere had gripped the assembled throng, leaving them in a happy gathered crowd. A few people hovered around the fringes, in the surrounding rooms, including the equivalent of the living room where I was packing my gear up. My duties were over.

An older attractive couple were sitting by the large windowsill shelf, overlooking the city. The woman had on a light, cotton dress, the curves of her body showing through in silhouette, illuminated by the dimming sunlight over the city. We were on the 17th floor, it was an impressive view.

He was chatting and joking with her, taking pictures of her stretched out in front of the window and showing the results to her. He obviously liked what he saw. The were oblivious to the 2 or 3 other people in the room, myself included, even though I was mere feet away from them.

He continued to snap pictures, inching closer to her. After one round of pictures, she swung her legs off the edge of the windowsill to look at them, and as she leaned forward he wrapped his arms around her calves, pulling them around his waist. She locked her ankles around his waist, pulling him towards her. They were laughing and joking, but you could tell that the barely restrained growing arousal between them was a distraction from their everyday banter.

Their electricity was contagious, there was only a few people around, but looking at the way they were shifting uncomfortably in their seats, you could tell the sexual tension crackling and fizzing between the couple was noticable, and spreading across the room.

I was going back and forward between my bags and my gear, each time I would pick up a piece of gear to pack up, their hushed conversation would come into range, and I would pickup a snached tantalizing piece of their exchanges.

He had begun grinding against her how, their limbs still tightly locked. She was snatching breaths between their words.

They had reached this tipping point, and were seriously considering fucking, right there. An adjustment of clothing here, a thrust forward there, thats all it would take. Nobody would care, after all. This was particularly open company, not necessarily an unusual sight.

More snatched conversation. They were racing to think of alternatives, scenarios. She had a condom to hand. She was half warning him, half pleading with him. This alternated between making sure they were both commited to the act. The pendulum swing between stop and goo, holding back and going for it.

Their lust was infectious. I felt light headed.

My packing was done. I made my excuses and headed out to the overcast skies and walked home. I wondered about them on the walk back, and could only imagine what happened next.