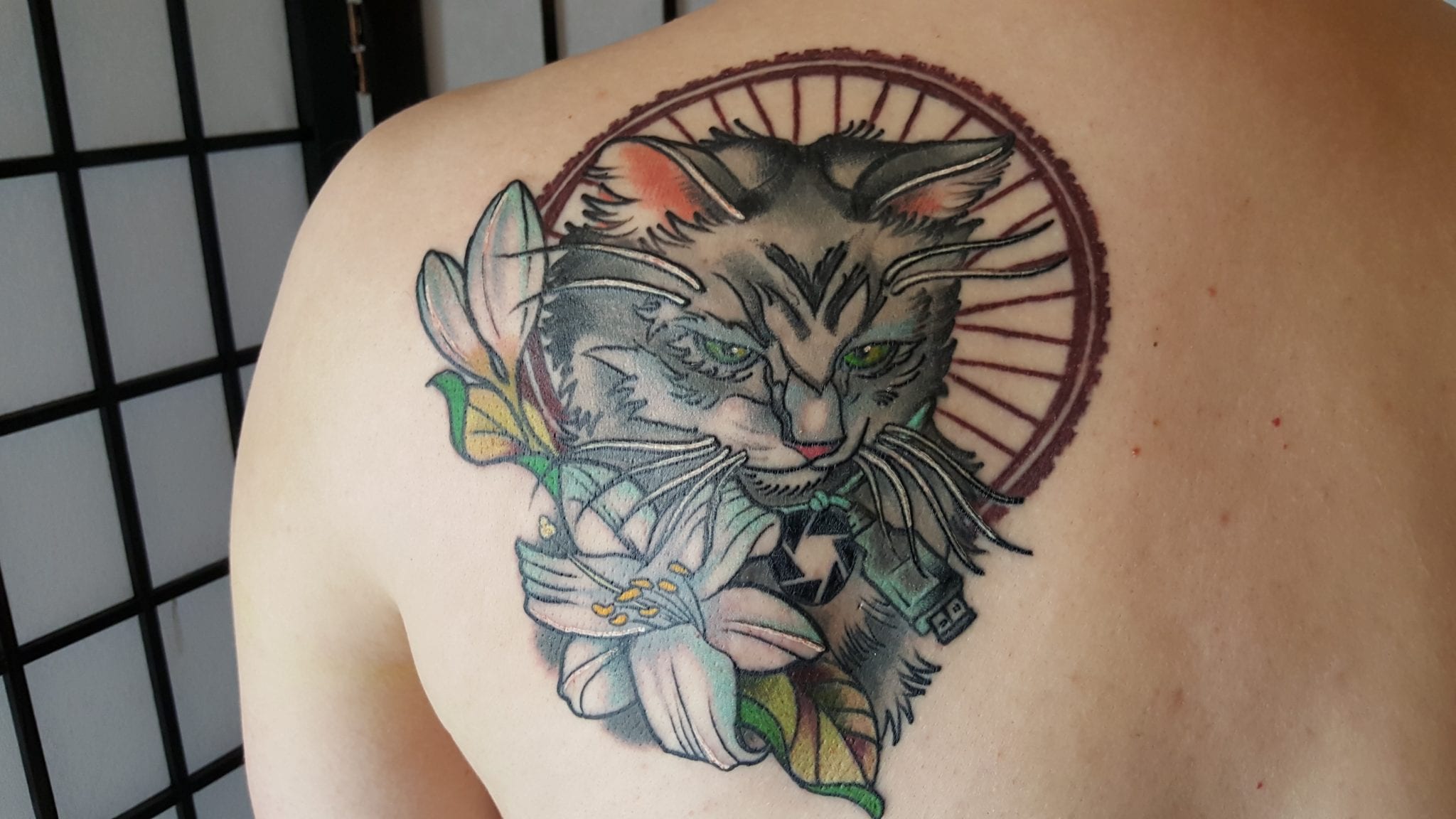 Let me begin by admitting something. I am a wimp.

I don’t think I am being overly unkind to myself, I am just being realistic. I am not a manly man; the kind of arm-amputee-its-just-a-flesh-wound type of alpha male. My relationship with pain is a long one, to the extent that I was so accident prone, and in and out of hospital type establishments when I was a child that my mother was casually quizzed about her level of care and attention to me. I would regularly clatter and bash my childhood rubber body and growing bones against all manner of inanimate objects. I shoved a metal spike through my foot, I ran into a wall and knocked myself unconscious, broke bones, got stiches, covered the whole range of injuries.

Since my teens, I have remained relatively pain-free. Careful, aware avoidance of the potential for pain. In the greater picture, I realize that we have relatively small control over our pain potential enviroment. We live in a world where so many things are out of our immediate control, and unwelcome accidents can and will happen.

Last January I fell in the street and fractured/broke my arm. Probably a hairline fracture. I stumbled, fell forward, arms out instinctively to slow my fall, and the rest was painful history. I soldiered on and things slowly healed.

My recent roomate is a tattoo artist. She has an intimate, ongoing, career-length relationship with pain. She gets up in the morning, drives to work, and hurts people, who pay for the privelige of leaving a permanent artistic statement on their body.

I have two small tattoos on my body. The first, a small one, when I was 18 or so, was a statement. Testing the waters, a small act of defiance, marking my body as a rite of passage, but not a careless act. The mark was carefully considered, assessed for a longer-term impact, attempting as best I could to put it in a lifelong perspective. The pain was mental, I had hyped myself up so much beforehand, built it up into such a big deal that I nearly passed out twice getting it done (mainly a mental problem, I had linked it to a fear of needles and injections, which amplified the act, and that overcame the pain of the process. It was a small tattoo, over and done in a flash.

The second tattoo, I got when I was 30. It was a marker, a signpost, a stick in the shifting sands of time showing where I was, where I had been. I got it in Shanghai, a few days before I left China, to summarize my time spent there. I guess because of my different mental approach to pain, my lowered fear of needles, and the friend that was with me, I barely remember the pain. That, and the soft fleshy part of my shoulder, just having one color, one needle, it was bearable, despite it being bigger.

Fast forward to 45. I have been in Canada for 10 years, and I am looking at a change of enviroment. I feel a closing of a chapter, and I need to make my progress. The desire to brand myself and document my path through life becomes stronger again, and having a roomate who I consider a ‘proper’ tattoo artist is a lure too big to resist. I choose a design that factors in multiple elements from my time in Canada, and my personal growth. We collaborate, but the real artistry comes from my roomate. (On a side note, her work is awesome, check her out here).

A design is agreed on, and printed out, but seeing it on paper and realizing the real-estate of skin space it will take up are two different things. I underestimated the size and ambition of the piece, but it looks amazing, so we book a session. The hope is that it would take two sessions, it looks like about 6 hours work to finish it.

The first session is doing the lines, the second session would be coloring in, once the linework is complete. When the tattoo work starts, its a familiar feeling. A kind of deep, burning scratch. I am lying face down on the tattoo table, attempting to relax. This is the first tattoo that takes time to complete. Something that evolves, rather than is started and done in the same session, so I have to come to terms with the process and make things right in my head.

The body is a map of sensations, varying from place to place. What feels managable on one area can feel radically different in another part of the body, even inches away from the first area. Some parts of my back are more painful, and some of the linework is deep. The thick lines require a larger needle. She has to hold me down and stabilize the area before each line, so that her artistry is intact.

What becomes apparent to me is, at least with my personal relationship with pain, is that the pain accumulates over time. I am used to pain being a ‘one-and-done’ situation. You hurt, you heal, you move on. But having a tattoo is different. At least at the moment you get it (I can only talk for myself, and thats another thing, pain is subjective, different for everyone).

The pain builds. It shifts from managable to uncomfortable to borderline unbearable. I begin to anthropomorphize my pain. It becomes a version of me, talking to me, standing over me, gloating, feeding off my weakness and fear. I picture him standing at the foot of my tattoo bed, out of my field of view, mercelessly mocking me, conspiring with the tattoo artist to inflict the maximum amount of pain. I start to bargain with him, in a futile attempt to minimize the sensation…..just a few more lines….this one won’t hurt as much as the last one…..I can cope with it….but all is blocked out, forced from my head as the next line is drawn on my body. I can barely hold a conversation, as I find it hard to focus on gathering enough brainpower to focus on an answer instead of maintaining the mental capacity to fight the pain.

It’s about the two hour mark, and I reach my limit. My negotiations with my pain person conclude, and pain wins.

The lines aren’t even completed yet, but the framework is done, the foundation is in place for a second, and third session, as it appears because of my tolerance, that we will need more sessions to complete it.

As my pain person fades away, I become apologetic, frustrated about my lack of tolerance.When the pain fades, reason comes to the forefront, but reason and logic cannot explain the presence of pain, as pain is illogical. Why couldn’t I take it? Why didn’t I ‘man up’ and push through it? I am told that my tolerance is perfectly average and that I have nothing to feel bad about, but somehow I don’t believe it. I am frustrated and saddened by my bodies’ response.

After the first session, in the days later, my body appears to overcompensate, I get a cold, feel weak…it is like it is trying to reject the tattoo, expell it from my body…but this passes.

Along with the second session comes a little more sense of perspective and familiarity. Now that the watermark of tolerance has been set, I am a little more confidant about what I can take, however, I am surprised that the process fools me the same way. The first strokes are managable, so I mentally project……my pain person arrives and I tell him that it’s not so bad, that I can cope, that he won’t be needed today, that I will be better now that I am armed with knowledge and experience from the first session….but as logic and calm gives way to frustration and pain, I realize that things are going the same way as before. My resolve crumbles, my bargaining falls on deaf ears.

New realizations. The depth and level of temporary intimacy between the person wielding the power to inflict pain, and the target of it.This is enhanced by my familiarity and friendship with my roomate, but I think it would happen in a similar way nonetheless. We as clients invite this person to brand us for life, to grant them a rare level of access to our bodies…a mutual complicity bound by the moment, where artistry and creativity meets a kind of controlled brutality. In the moment, this intimate access is bundled into the rush of emotions. I have to project my pain somewhere…mentally  I resent her, the access I have given her to scar me, I need to blame somebody, something, away from introspection for the cause of my suffering, so she becomes an easy target, wielding the weapons of anguish.

I also find myself vulnerable, emotional, as the layers of everyday protection and defense are stripped from me. I become teary eyed, childlike, as if there is something inherently unfair about the situation, as if I am a victim of forces beyond my control, even though I am the instigator and the paying participant. I want it to stop again, the bargaining with my pain person brings no refuge, and again, I surrender.

The same small procession of guilt and shame follows, the return of logic and the self examination, about my inability to outlast this sensation, to think my way through it.

Another round of healing and un-healing brings a climax to the proceedings, and after the third session, I bid farewell to my pain person and nurse my self accepted wounds, as the piece is completed, and my body moves forward, changed, yet the same, branded with a new landmark documenting my evolution and life experience, a kind of permanent shadow on my back where my pain person left his mark before he faded away. When will we meet again?