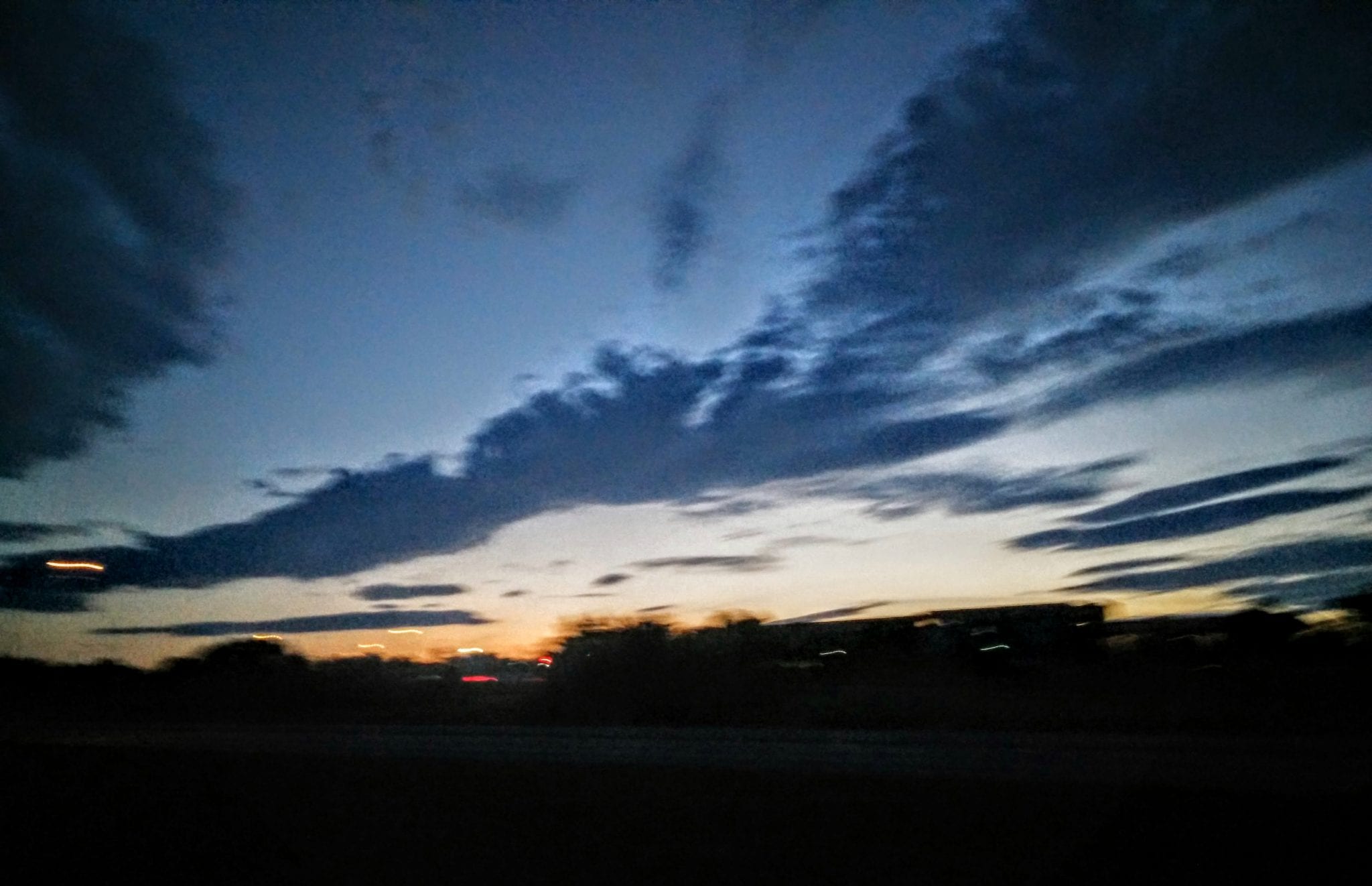 It becomes harder to apply when the subject is yourself rather than some movie, but the general rule still applies.

I planned on a bike trip to New York this last week, worked hard to clear my schedule, barely scraped enough cash for the trip. I had a mixture of campsites, free couchsurfing, and airbnb accommodation booked, with a return bus ticket from New York.

The mileage was ambitious, but acheivable, and I had done a practice run of 56 miles the week before with a fully loaded bike. Fitness was an issue, but I was as ready as I was going to be. If I left it too much later I would lose the last of the summer heat, the bike would be in storage, and that would probably be it for my Montreal experience.

So, I set off bright and early at 7am on Sunday morning on the first leg of my trip. The plan was to get to New York by the following Friday evening, spend the weekend in NYC, and bus back to Montreal on Sunday overnight…with or without the bike. (I could pay extra and bring it back to Montreal in the bus, or I could sell it in NY, depending on how things went).

The first part of the journey was from Montreal to The Grand Isle, the biggest island in a chain of interlinked islands, closely grouped in Lake Champlain, Vermont. I had a campsite booked for that night. I had looked into ‘stealth’ camping, or basically sleeping semi-illegally wherever you can find a bit of concealed woodland, but I felt safer with a secure destination to head for.

I had my cellphone with google maps hooked up to a solar panel, and a roaming sim card, so I could track my journey.

Leaving Montreal, and the familiar surroundings ended soon after the bridge connecting the island of Montreal to the mainland. I was soon in strange areas, although it was flat and level. A few deviations from the path were easily corrected through google maps, although the heat was a constant companion.

The route was very picturesque, winding itself back and forward alongside the river and a canal that ran next to it. I was eating and drinking vast amounts to fuel the tank, as the temperature was up over 30C, but the progress was steady.

After what felt like an age, I left the river and headed towards the US border. The route was now long stretches of flat countryside roads, relatively quiet. I was headed for the smallest border crossing I could find, unusual in the aspect that it was so small that the US and Canadian crossing was housed in the same building. A small wait, and I was cycling through border control. I had to dismount and bring my papers in to the building for further processing. It must have been around 2-3pm by the time I had gotten to the border, about 56 miles from Montreal.

Although my papers were in order, I had overlooked one crucial thing, it cost me 6 USD to get across the border, and I had absolutely no cash in my wallet. My campsite was already pre-booked, and I was using my debit card to pay for everything along the route. Because the border office was so small, I was essentially in the middle of nowhere, so I couldnt ride to a local shop to grab some cash, and the border office didn’t read my debit card.

(Thinking about this, I has a curious, storied, and largely embarrasing history with border crossings…seems to be a running theme in my life).

Anyway, I was a random, sweaty, apologetic Brit, trying to offer creative solutions, like Paypal, in a random border office. My trip was looking stumped before it even began.

The border guard called her supervisor, and he left it to her to make the final desicion, and in her infinate wisdom and beauty (compliment compliment) she decided to waive the fee and left me through. Phew.

It turns out that not too far the other side of the border, there was a pretty thriving community in Vermont, so I grabbed some food, drink, and put some emergency money in my wallet for the rest of the trip. Now the priority was the clock, and getting to where I needed to go before sundown. I was already taking longer, and more fatigued than I thought I would be, but it felt good to be in US territory, and I was keeping pace.

I hit the tip of the island chain and the lake, and things got really pretty. Despite the heat, and my energy level, the road was generally flat and very pretty, and I soldiered on through the island chain. I hit the ‘Grand Isle’ (the island with the campsite) about 6, and now I was chasing the sunset, due for about 7.30. I took a wrong turn which nearly ruined me, and I almost burst into tears finding out that I still had 7 miles to go. A final visit to a shop to stock up on food and drink, and I found the campsite just before sunset.

Finding my campsite space, I just had enough time to put the tent up in my exhausted state as the sunlight was fading. I changed out of my clothes and started to relax as it got dark. 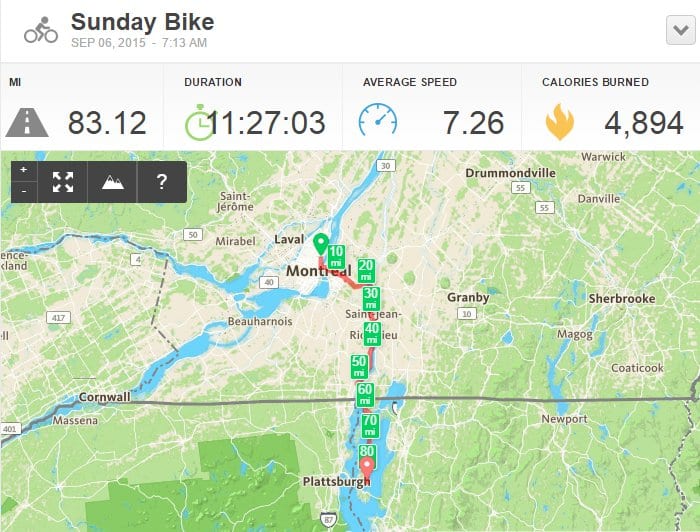 One thing became clear…84 miles had taken more out of me than I thought, and tomorrow wasn’t an easy day. I had sceduled a trip to a mountain peak, and although the distance to the mountain was not far, the timing and climb, and relative ‘middle-of-nowhere-ness’ of the region spooked me, so I re-routed myself with a straighter, flatter route south towards NYC.

Sleeping under the stars was a special feeling though, and the tent did its job.

I was up early, perhaps around 5.45am, to pack the tent and prepare for the next day’s journey. Out of the campsite after 7, and on the way. My task was a more approachable 55 miles, so I left in good spirits….however, the heat and elevation was my enemy. It quickly became apparent that when the island chain was done, the route became rolling hills.

The hills weren’t big, but the fatigue from the long journey of the day before, and the fact that there were more long uphill slopes than downhill breaks meant that progress was slow, and I was getting off my bike and walking more often than not. It was discouraging.

Now it became a mental battle. I was around 20 miles into the days trip, and walking more than biking. The rolling hills looked endless, and there was little to break the monotony, other than what was in my head, which was relatively dark at this stage. I actually stopped for the best part of an hour outside a random house and hitchiked, hoping for a flatbed truck to take me and my bike over the hilly roads to a good sized city further down that I could gather myself. However, relief didnt come, so I continued slogging along.

It was a series of climbdowns. A mental retreat. A domino effect. One small desicion after the next, tumbling through my head, and before I knew it, my trip was over even while I was still moving the pedals on my bike. While I was making slow progress, I was planning where and how the route would end, and what to do next. Before I stopped, I had already stopped. 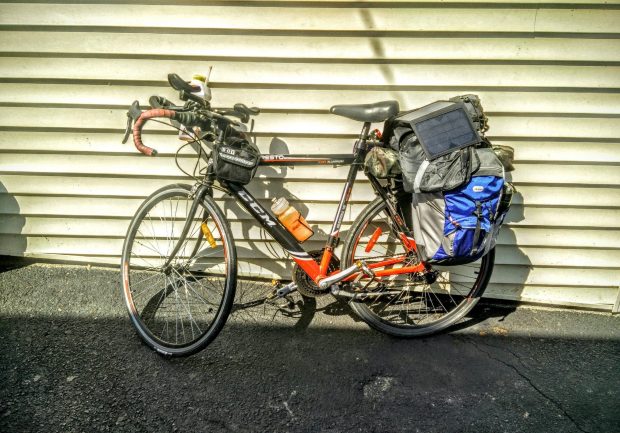 My journey was over at Burlington, Vermont. It was mid-afternoon, and my forward progress had slowed to a sweaty crawl. The bike suddenly felt like a burden. It was labor day, and ironically, there was a professional cycle race going on in laps around the city center, so the city was buzzing. I found an outdoor shop with a large bike repair section, and before I knew it, my bike was sold for a paltry amount. I gave away most of my bikes belongings for free. I didn’t need them anymore. It was dead weight, a burden. What brought me there now was my anchor that stopped me moving forward, so it was gone in an instant.

How did I feel? Surprisingly ok about it. I squared things off in my head. Once the dominos started to fall, then the only result could be the end of the journey, so all the steps leading to it felt…logical.

I romaed the city for a while….incidentally, if Lululemon and American Apparel were given city planning rights the Burlington Vermont is what they would come up with. Everyone was fashionable, the city was affluent, trendy, attractive. It was unnerving. I was a random sweaty overweight Brit and I felt uncomfortable, but it was interesting.

The dominos continued to fall. A rebooked bus ticket, cancelled accommodation along the route to NY, new (second hand) travel bags bought to take the rest of my belongings home. A commiseration beer at a local pub while I ticked down the hours to my return bus. Before I knew it, I was sitting in the airport, waiting for my bus to leave back to Montreal. And the kicker…the bus back was only 2.5 hrs to Montreal. An epic journey there, a short hop back.

What did I learn? My fitness level simply wasn’t there. I just didn’t have enough in the tank to sustain ongoing distances and hill climbs. The heat was just too much. I had set an ambitious schedule…if I had just left things a little less tightly booked, and a little more open ended…then again, that would have required a bigger budget, more time off, neither of those things I could afford.

I don’t have many regrets….not too many….financially, it was a bit of a disaster, but thats money. Comes and goes. My goal wasn’t achieved….but I did try. I slept under the stars…I cycled over 100 miles….followed the route for a while…feelings of sadness mixed with happiness, pride and embarrasement….but I gave it a good try. Like those bad movies, you learn from the bad stuff as well as the good, and you move on. Whats my next stop? 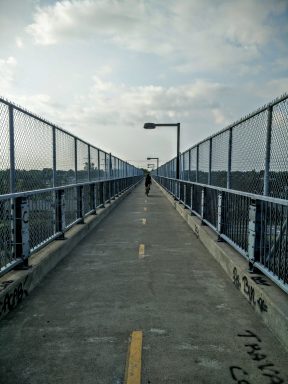 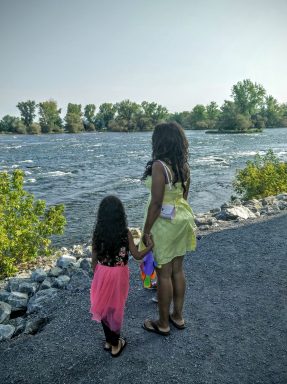 A family came to see the river… 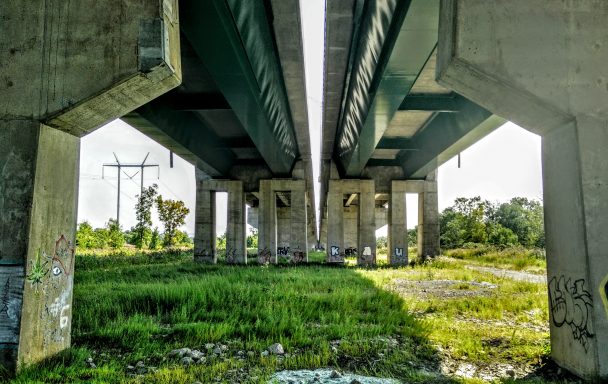 A bridge near the river… 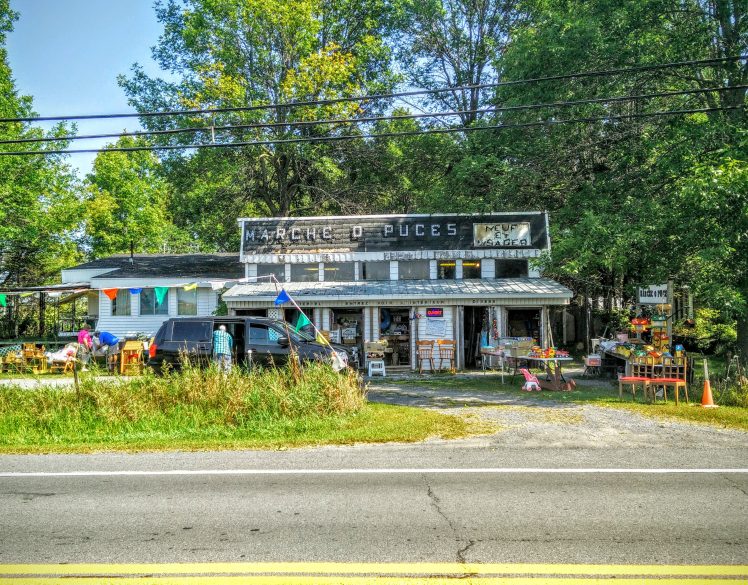 A random shop in Quebec… 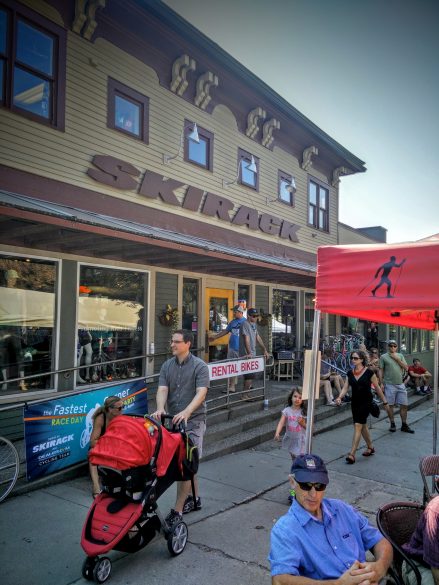 The final resting place for my bike…
Previous Where we go, where we’ve been.
Next Sky Scared – My first drone flight.