Saturday morning comes early. Really, really early. As is life, it seems around here. Awake with the heat of the sun means awake at around 6-6.30, maybe earlier, evening sleep comes around 9pm.

I had slept in fits and starts, but was rested enough when the sun came up. The power was cutting in and out during the night, which would wake me up each time the electricity kicked in, sparking the fan back to life.

The main order of business today was going to be Mgr Max Mésidor succeeding Bishop Kébreau in Cap Haitien Cathedral, which apparently was a big deal…bigger than any of us imagined. The old order being replaced by a younger bishop in a special ceremony in the biggest church in the city.

We were driven to the newly rebuilt city square, and the freshly painted church facing it (not kidding…they were still painting the exterior the day before the ceremony). The police had cordoned off the square, and we waited in a nearby building where all the bishops and priests from different congregations had gathered for a procession to the new church. I met the pastor of the catholic compound that I am currently staying at, and he guided me into a position to film the procession to the church.

I gathered my gear as my escorts made their way ahead of the procession to be seated at the church, leaving me alone, and just went into work mode, capturing what I could of the procession. I had noticed just before it started that the standard greeting between the religious folk here (and not between Haitian residents, apparently) was a kind of soft headbutt…pressing foreheads and temples together as a form of greeting. Interesting, and potentially painful if mistimed…

So, I followed the priests to the church, a long line, and at the back of the queue, the last into the church, was the current ordained, and the new bishop.

It began to dawn on me how important this ceremony was to people here as I noticed the gathered crowds, and the media buzz. The church was packed, an overflow of people standing at the entrances. There were countless videographers and photographers jostling for position around the church entrance. The nerd in me noted the technology utilized, from tablets and iPads held aloft recording things, to basic video cameras, stuff that we saw perhaps 10 years ago, digital tape media cameras, like the first camera I shot with maybe 10 years ago, the Canon XL-1. Some photographers with large zoom lenses, D-60s, EOS brands. A curious mix of the arcane and up to date, although people had more modern smart phones in the audience than the news cameraman had in their cameras.

We gathered around the front, and I grabbed occasional clips the best I could, working my way around the scrum of media to find the shots necessary. There wasnt a particular goal in mind, just to cover the event with some interesting clips.

The church service stretched on, and suddenly, commotion in the crowd, and a group of people moving quickly to the front of the church, followed by a rush of media crowding around. I maneuvered the best I could through the group to find a bunch of secret service types fanning out and controlling the media scrum, and in the middle of it, Michel Martelly, the President of Haiti, taking his seat on the front row.

This is a pivotal and potentially unstable moment in Haitian politics. The current leader has been in power since shortly after the earthquake, and had been promising open elections, supported and approved by the US and UN ever since, however, this transition of power has supposed to happen a number of years ago, and the transition is long overdue, which is testing the patience of the opposition parties, unhappy with post-earthquake reforms and mismanaged projects, and the public, already brow-beaten by natural disasters, and the UN introduced outbreak of Cholera to the country, confounding the recovery efforts.

Added to this mix, two very recent events, first, the 5th anniversary of the earthquake, just a few days before I arrived, on Jan 12th, which saw the world’s media descend on Haiti for a series of ‘before and after’ pieces, highlighting the good and bad about the countries’ recovery since the earthquake. The consensus seems to be, although great strides have been made, there is a controversy about the amount of money pledged since the earthquake, and the actual on-the-ground efforts to spend that money. The gulf has widened over the years between money pledged, and visible proof of money spent.

Secondly, the leader’s mandate to rule the country with his political party had literally expired, with the government actually being dissolved, and the leader becoming the sole President and ruler of the country. The opposition parties claim this was the plan all along, so he could seize power before launching fresh elections, the president has claimed that the opposition is dragging their heels and unnecessarily prolonging the process, so neither side is getting anything effective done. This has resulted in citywide protests in the Haitian capital, urged by the opposition, resulting in an unhappy nation with an uncertain future still healing from the earthquake. In fact, there was travel warnings on all consulate websites due to the unstable political situation.

So, who swims into focus on my viewscreen, but none other than the President of Haiti himself. I am literally spitting distance from him and his entourage. The man I saw gracing the screens of CNN, BBC and other affiliate channels 24 hrs before is now sitting close to me.

Before I can catch my breath, I am hustled to the opposite area of the church by a fellow media camera guy. I assume I am in trouble, the sole white media guy and only one of a handful of Caucasian faces in the entire church…but no, I am handed an accredited media pass, and told I can stand ‘wherever I like’ now to film. The public is being herded into certain sections, but I am free to jostle with the media crews right to the boundaries of the altar and film, including getting as close to the president as possible for a couple of shots….him mixing with the new bishop, chatting casually with a young child the row behind him, laughing with his entourage.

We are in a country where fully 80 percent practices the Catholic faith…the church is big business here, the priests and bishops are powerful influential people with the public…it is believed that an unshakable faith is one of the cornerstones of Haitian society, that got them through multiple previous adversities, including the earthquake. This means, Church first, State second. The opinion seems to be that the president made his appearance at this important religious ceremony to show his support for the church and attempt to get on the good side of the religious order, and public opinion. To be given a subtle approval by the church’s higher order would be a major and much needed boost to the president at this fragile stage of his tenure as the now sole leader of the country in a state of flux.

So, i find myself in a surreal moment, splitting my shots between the ceremonies and the president and his entourage. The ceremony seems to stretch on forever, over 2.5 hrs of speeches, religious procedure punctuated by vibrant musical numbers played by an enthusiastic live band and a full choir. Finally, after a couple of laps of honor so the newly appointed bishop can mingle with the gathered masses, the priests file out of the church, followed swiftly by the president and his group, who make a swift exit by motorcade, and then the people, drifting out into the hot sun. There is a noticeable heavily armed police presence on the streets, and a visible number of UN soldiers, mainly there just to be seen, rather than to do anything tangible, but they are noticed.

As for me, my feet are bricks of pain, and I am sweating bullets, however, my phone wallpaper is now the President of Haiti and I have a new, laminated, unique press pass to add to my collection. Strange days… 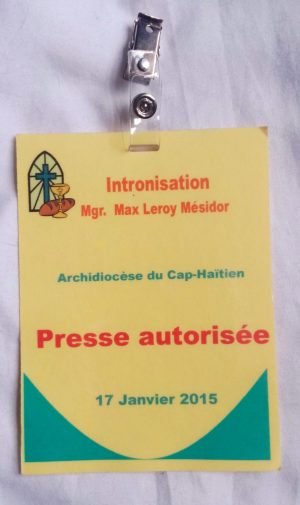