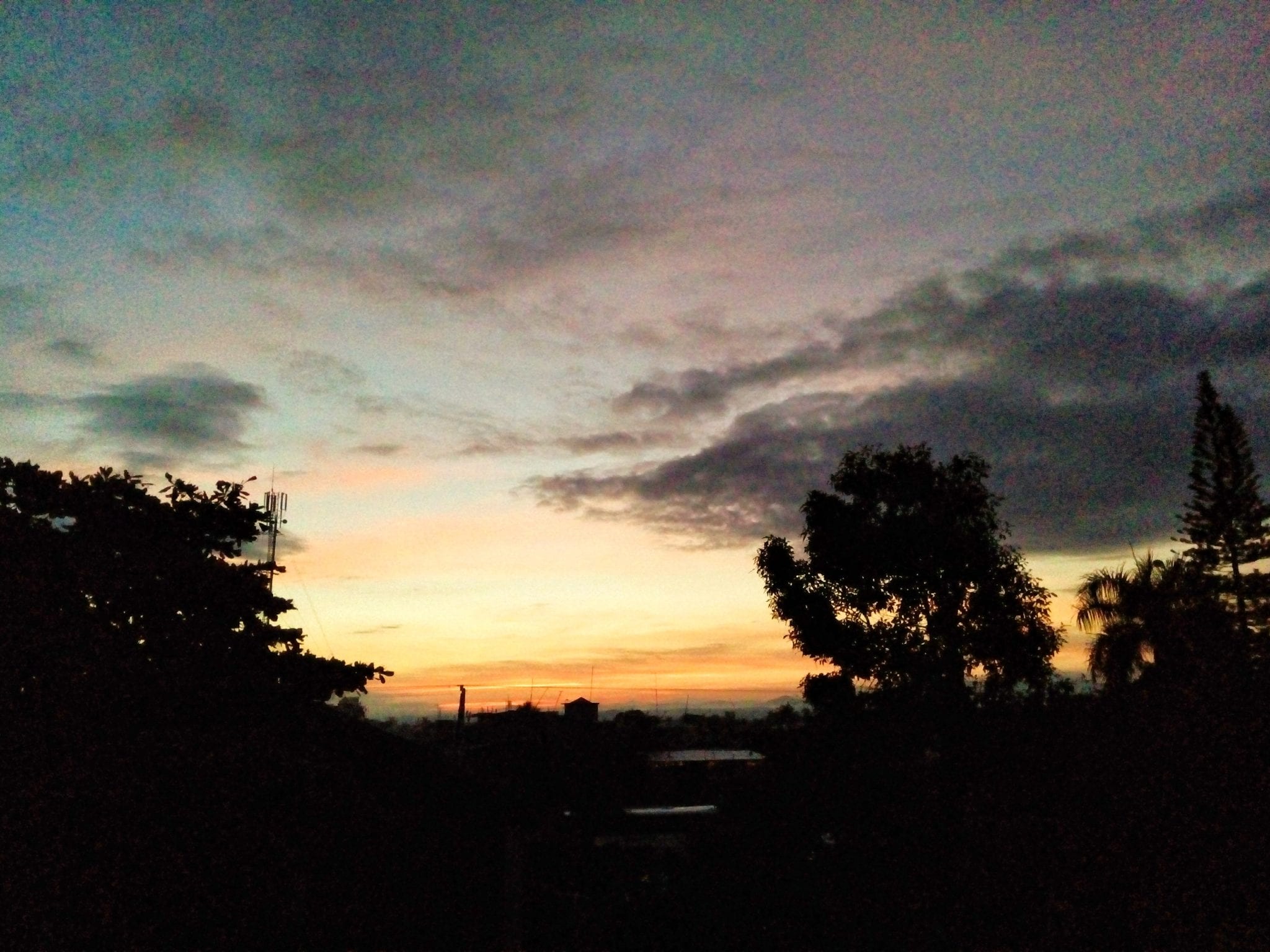 A day of thoughts for me. The timetable was relatively simple, Church in the morning, then a free day, a trip to the beach.

I am staying on a church compound, a gated community, containing a couple of school buildings, a small walk-in clinic, a pharmacy, the pastor’s building, containing the rooms where we sleep, and at the top of the hill, the church, an imposing building set at the base of a mountain range that sits between the city and the beach. There is a long walkway and a final flight of large stone steps leading to the church’s front entrance where people contemplatively trudge their way up to the morning service.

The first church bells were at around 5.45am, before the skies began to lighten before sunrise. The noise is inescapable. I awoke with a lurch.
As the sun came up, people dutifully filed into the church, dressed in their Sunday best, which put me in my jeans and dusty boots to shame (if anyone is following the saga of my ripped jeans, by the way, the crotch was still ripped…yes, I stood in front of the President of Haiti with a torn crotch…luckily I have dark boxers on under so the tear doesn’t show…heh), but I didn’t pack anything formal, so I had to wear my everyday gear. As the sun rose, the church is so that the rising sun blazes directly through the main doors and illuminates the altar with a fierce natural light.
It was packed in there, standing room only, people of all ages filled the hall.

The service itself seemed of typical fare, overlong, punctuated by live music and hymns lead by the choir, passionate speeches, ancient rituals, the whole thing. I was a little bored, given my less than passionate religious stance, and my lack of language skills, so I just absorbed things from a distance.

After the service, and people filed back down the hill, we had lunch, and gathered ourselves together, to get picked up to go to the beach resort/hotel, Cormier Plage. It is one of two nearby resorts where westerners go to, the other one is a gated community, protected, monitored, and the stop off point for a lot of the cruise ships that work their way through the Caribbean, Labadie. I didn’t personally confirm it, but apparently when the ships stop off there, Haiti isn’t even mentioned…the resort becomes a fictitious country, Labadie, and the residents, Labadiens….it’s like this fake strip of land split off from the rest of the country for the benefit of the tourists. The resort we went to is a little more laid back, the beach is accessible from all sides although the particular stretch we were on was a part of a hotel resort, with a bar, restaurant, and a cover for people to stay on the beach and relax.

To get to it was about a 30 minute drive over the aforementioned mountain, leaving tarmac roads behind and driving over dirt and gravel, past the poorer communities hanging onto the side of the mountain.
I was filming from the SUV in the back, pointing my camera out of the side windows to capture some local flavor, when the first of 3 curious incidents happened that day; a group of 3 youths gave me the middle finger as we drove past. Now, I don’t really care, whether it be the false bravado of youth, acting cool in front of their friends, or genuine dislike seeing a white guy drive past, it makes no difference to me, but their stance was noted.

So, we get to the beach…beautiful place, I mean, picture postcard…It’s the first tropical beach I have ever been to, and it’s as good as whatever I have seen on TV. Warm sand, cool but not cold water, and a dry heat sun that keeps you avoiding most of the sweat….but I soon felt a little awkward about my surroundings. Suddenly I saw tourists, white faces everywhere….where are they in the city? It all felt a little…privileged….and it made me feel a little antsy.
Don’t get me wrong, Im happy I was there, and the experience was glorious, if nothing else, I have a couple of promising wallpaper pictures for my pc when I return to the frozen north…but it struck me how unlike the rest of the city this seemed to be. Hard to explain. I didn’t feel like I belonged, or should be there….the feeling was a little magnified because I had no change of clothes, no swim clothes, so I was sitting awkwardly on the beach in my jeans and socks and combat boots. I couldn’t go for a swim, but I did manage to briefly dip my toes in the water (and simultaneously soak the bottom of my jeans in true beachcomber style).

Anyway, we lazed around, and ate in the local restaurant, where there was a wifi signal (glorious, glorious wifi, so I could catch up after a few days of disconnect).
We were getting ready to leave, when I heard the sounds of a musical parade/procession, and a cluster of perhaps 50 locals making their way along the beach, in exaggerated party fashion, some kids doing backflips in the sand, some older guys dancing to the live music.

I went back to the table and grabbed my camera rig (I take the damn thing everywhere) in order to capture the sounds of live music…I keep trying and failing to get good quality audio of the music here…
I returned to the beach to find a surreal scene….the party group had stopped at the main part of the beach, and tourists had gathered, whipping out their cellphones and filming the commotion. Between the tourists and the partygoers was an informal, and discreet line of resort security, all local Haitians, maintaining a polite distance and separating the two groups. There were only 3 or 4 of them, but it was enough to maintain the separation.

A couple of guys noticed my camera rig and approached me, an angry look on their faces, and demanded to know in broken english, why I was filming them, and asking for money. I told them I had none (which was true). They were frustrated, their faces curled up in anger and disgust.
One of the security guards made a beeline for us, and as soon as he was within earshot, its like someone turned an emotional switch in the others heads, they became happy, friendly, polite, and respectful, shaking the guards hand, smiling, calling my sir, and immediately backed away back towards their crowd.

I cant be sure, but it seems the group was protesting the beach access, even though the community isnt closed to them, the beach is accessible from either side, which is evidently how they walked down it towards the tourist spot, but it seems like a semi-private spot where perhaps they are discouraged from hanging out. Hard to say. Anyway, the encounter was a little uncomfortable, but nothing more.

We gathered our stuff together, and our guide drove us back over the mountain road to the compound. Back inside the gates, I did my usual post filming, broke down my gear and began to categorize the footage and recharge my batteries.

I heard singing from one of the school buildings, accapella harmonies, wonderful stuff, and again, determined to record some of it, grabbed my sound recorder and wandered out towards the front gates. I stood under an open window (I say window….glass seems a rare luxury…or perhaps redundant in the majority of buildings…it’s more like a series of holes, like a grill, opened into the wall itself…) holding my recorder up towards the windows slots to capture the best audio I could. I thought I was out of sight, recording discreetly, but evidentally someone who saw me outside must have gone inside to tell people.
I heard someone spit, and saliva whistled past my right shoulder. I thought nothing of it. Peoples hygiene tends to lack at the best of times. But as I shuffled to the right to continue to record, there it was again…and then, unmistakably, a third time, spit whistling over my head and past my left shoulder. This wasn’t just some random throat clearing, and I was standing in the wrong place at the wrong time, this was a concentrated effort to spit at me. For what, I dont know…for daring to stand outside the class? For bothering them? I doubt anybody knew what gadget I was holding, so I don’t think anyone can claim I was recording them maliciously or illegally or something.

There it was. I was a minority now. Truly a stranger in a strange land. The resentment of the white man, the outsider, representing the introduction of cholera, slavery, financial oppression, and more.

Perhaps it was just kids fucking around, perhaps it had nothing to do with me, but the three incidents together felt like something more than pure innocent coincidence. It doesn’t annoy me, doesn’t make me angry, it just makes me think about the past, about the legacy of light skinned people in these areas. I have been warned repeatedly not to go into the city without a local guide, because of the unstable political climate, because of the potential hostility towards people of my color.

There is no neat conclusion to this entry, it was just a curious rash of instances that makes me wonder how lighter skinned people are perceived in this proud island nation, about the legacy of what we do there, what we have left behind, how we have shaped things in other countries.