Back on the train! It’s a short hop from Florence to Pisa. I asked two Italians before I left ‘what’s the best thing to do in Pisa’ and their answers were exactly the same…’Get drunk’.

It didn’t exactly fill me with confidence to hear that, but I was only going to be there for a night, so actually, it probably would have been worse if it was a fun-filled, action-packed place.

A short 15-ish minute walk got me from the station to the airbnb. This one was a little more surreal….an apartment block, with a tiny 1-2 person lift…literally the substance of horror movies. A tiny plastic half door split in the middle that you open to an inner door into a space just large enough for me and my luggage. Very scary.

The room itself was also kind of odd. It was pretty clear that I was in the room of one of the family’s children who was probably out at university, or perhaps someone who had left home a while back and the room was in that ‘suspended animation’ mode where everything in the room was preserved exactly as if they had just popped out to the bathroom or something.

Half of me was tempted to just settle in the room and not leave, but it would have been a little silly to travel to Pisa and not leave the apartment, so I laced up my running shoes and dragged myself out in to the evening heat. I ran out and along the Arno river to extend my run a little, because getting to the main part of Pisa, the square with the leaning tower was a short run. As I ran along the river, I noticed a running shop, and went in, just initially to have a look around. The time for purchasing a new pair of running shoes was well overdue, and I wanted to compare the prices….they were about in line with the expected prices, perhaps a little pricier, but not too much. I got talking to the store owner, who spoke great English, thank goodness. He was a little older than me, and he had only opened the store a month or so ago. He gave me a great look around the store, and insisted on checking out my running style using an in-store treadmill and slo-mo video app, which was interesting. I was already a sweaty mess from the short run around outside, and the treadmill session didnt help. I was still mopping up the sweat and checking out a pair of shoes when an absolute….goddess walked in to the store. All legs and toned stomach and high shorts with the curve of the top of her behind peeking out from them, and a midriff top…..like half a workout outfit, and half a casual summer gear. She was radiant. In the shop and gone all too soon. She left two older, past their prime men with their jaws hanging open. The Italian shop owner mock-facepalmed the shoe display shelves after she left. I am glad I wasn’t the only person gobsmacked.

Happy with the running assessment, and thorough guide to the shoes, I ended up buying a new pair and left the store in them, retiring my old shoes in the garbage in the running shop. I simply didn’t have the space in my luggage for two pairs of running shoes, and they were about 1.5 years old, so, ready to try a new pair.

Resuming my route, I ended up in the Piazza Del Duomo containing the Leaning Tower just as the sun was about to dip behind the buildings. It was a bit of a race against time to capture the moment before the sun set.

There were a few ‘temporary salesmen’ (putting a nice word on it) selling their wares around the edges of the square, selfie sticks, phone cases, t-shirts and the like. One plucky individual decided to stand directly in front of me as I raised my cellphone up to take some pics, waving his selfie stick items for sale in my line of sight. There was a mini mexican standoff, as we both glared at each other. Who would move first, my hands to my wallet, or his feet out of the shot? Well, I certainly wasnt planning on buying anything, so after a glare, he shuffled out of shot, and I resumed my picture taking.

Trying to grab as much of the square as I could before it became too dark. It became apparent that this one square was pretty much what Pisa was based on, what it had to offer tourists. Even the main tourist strips all led to the square, lined with hotels and restaurants and the usual tourist traps.

It’s lovely to see the Piazza, and I am sure if I had time, and dug deeper, there would be more to offer in Pisa, but to be honest, I felt like I had seen what I needed to see after a night there, which was fine by me, as this was just a temporary stop on the way to the UK.

As it got dark, I wandered down one of the main strips and had a good meal, and headed back to the airbnb, to prepare for leaving. The flight in the morning was at about 6.30, so it required getting up about 3am to prepare and leave around 4am for the airport. The good thing, given the size of Pisa was that the airport was accessible, according to google maps, probably about 20-25 mins on foot, which was handy as the new Pisa Express airport service didnt start until 6am, so it was either a taxi or on foot. The airbnb owner assured me it’s easy by walking, so keeping that in mind, I got to bed.

My last night followed the same theme as the rest of Italy, heat and mosquitoes. The back of my legs seemed to be a popular destination throughout the week for those little bastards, and was full of itchy swellings, despite me getting through a couple of tubes of insect repellent and anti-itch spray.

4am. Gear prepped, wandering outside. Surreal. Nobody around apart from me, the skies gradually lightening before sunrise, my wheelie suitcase sounding unnaturally loud in the silent streets. Made it to the railway station, wheeled under the tracks through a pedestrian subway, and the airport is perhaps 15 mins away on foot. There is a small maze of back streets separating me from the airport, but it is not far. The road options narrow down to one country lane that leads up behind the airport. Time is ticking, but it’s not so bad…..except….the road is cut off. Heavy duty security banners and a couple of angry security dog type sounds. SO frustrating. I can literally see the small airport from where I am. Perhaps 5-10 mins from my position. Yet, walking back the way I came and finding a new route now would be perhaps 30 mins, and I would be cutting it a little uncomfortably tight for my tastes to the airport. I hesitate for the longest time at the temporary construction banners, even try to move them. I am tempted to try and hop the banners, and may well have done, however, my luggage is the deciding factor. Reluctantly I retrace my steps, until I hear the familiar rumble of another wheeled suitcase coming my way, and I cross a german tourist doing the same as me. Apparently his host also told him how easy and accessible the airport is on foot….without knowing about the current obstruction.

We both double back together, but thankfully, his Italian is fine, so he calls for a cab once we find one of the larger streets, and we gratefully bundle in to a shared cab ride to the airport…which is literally about 5 mins away by car, but around the front on the main roads instead.

The airport is pretty tiny, but functional, and in no time, we are through check-in and waiting for our respective flights. I am on an early morning RyanAir flight to London. The first time in 4 years I will set foot back in the UK, and onwards to the south coast to see my mom… 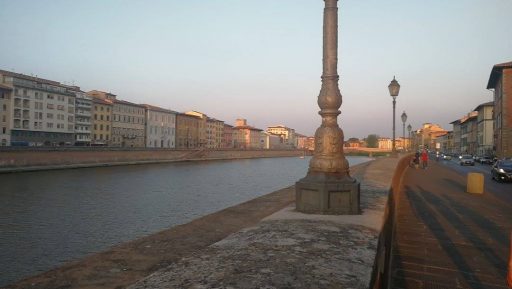 Running along the river 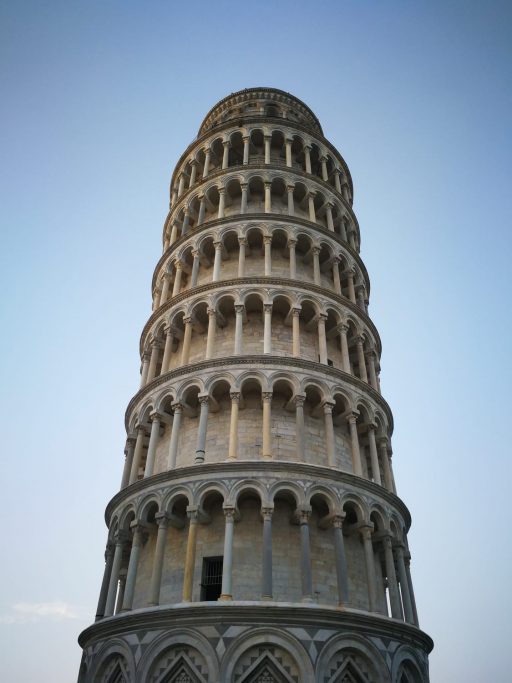 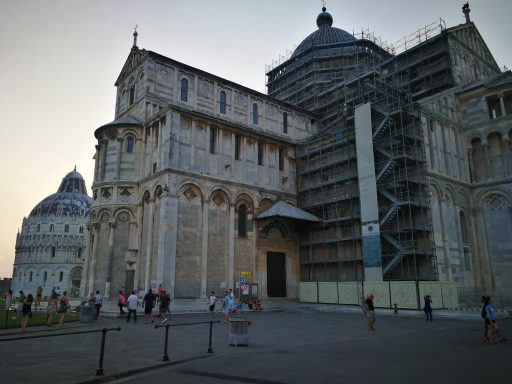 more details from the square 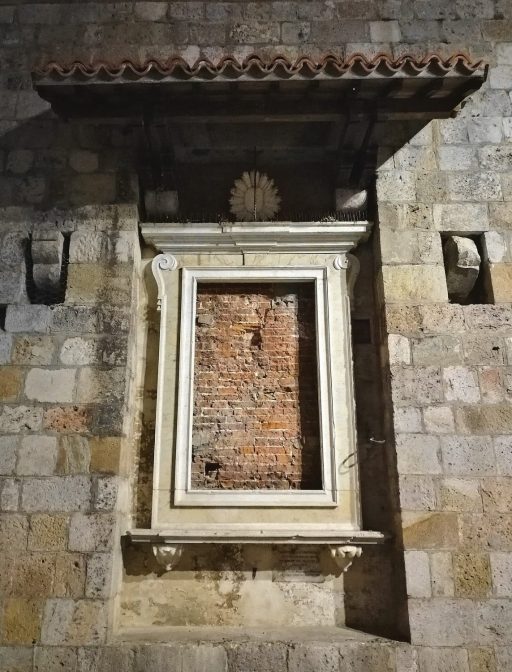 A frame with no details... 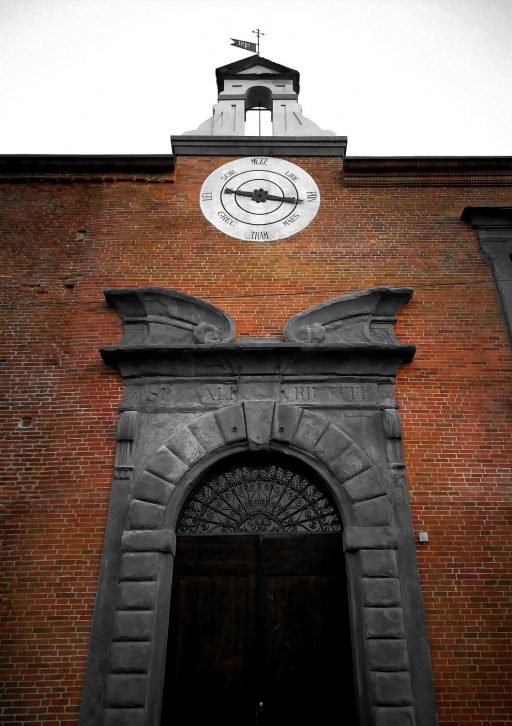 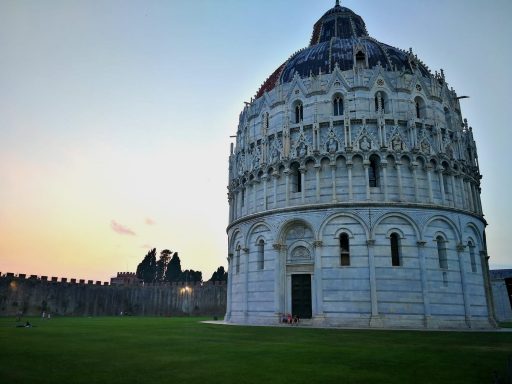 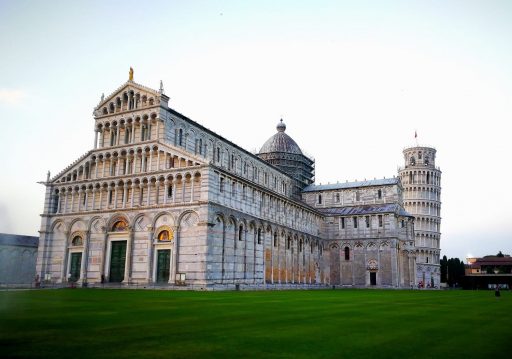 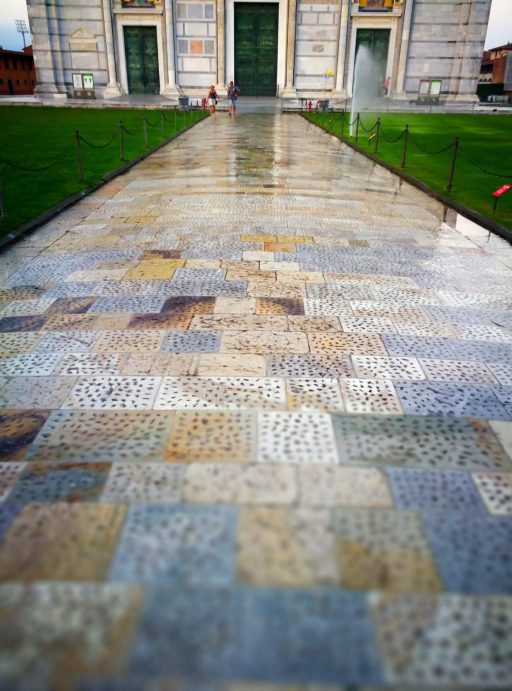 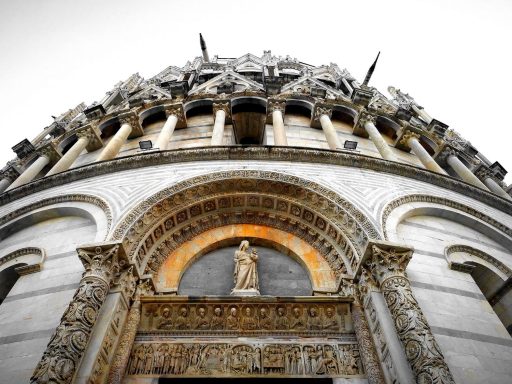 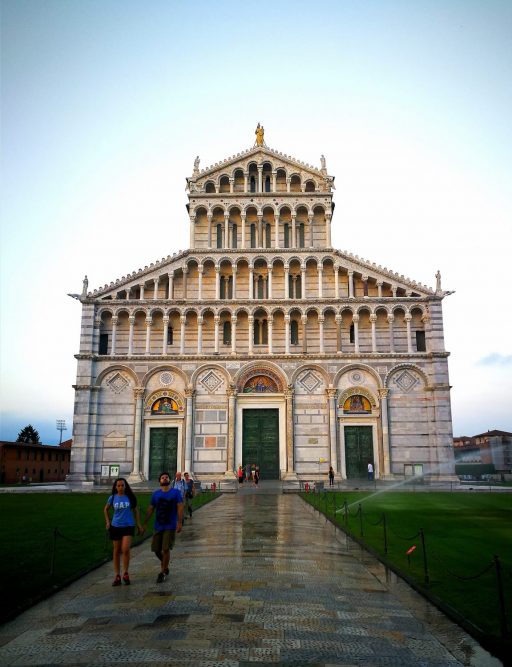 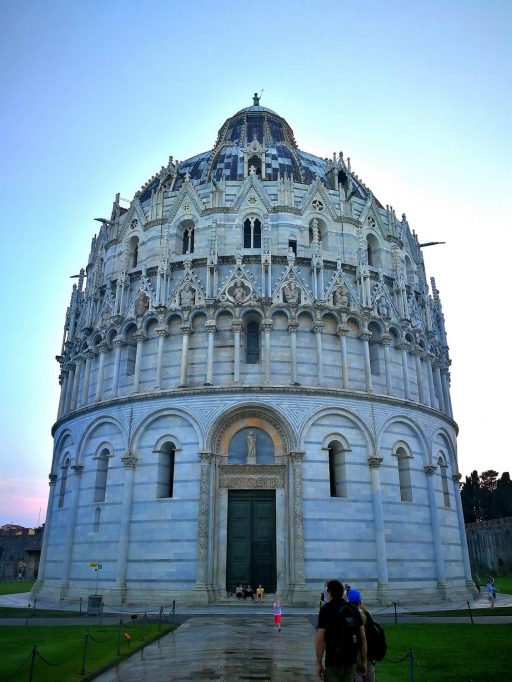 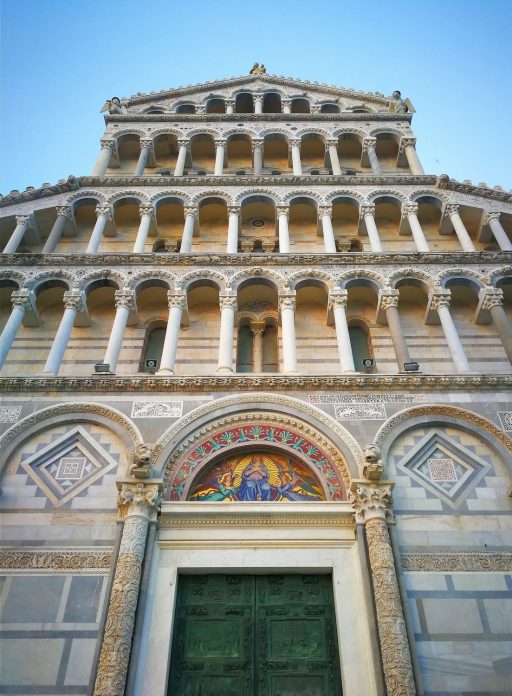 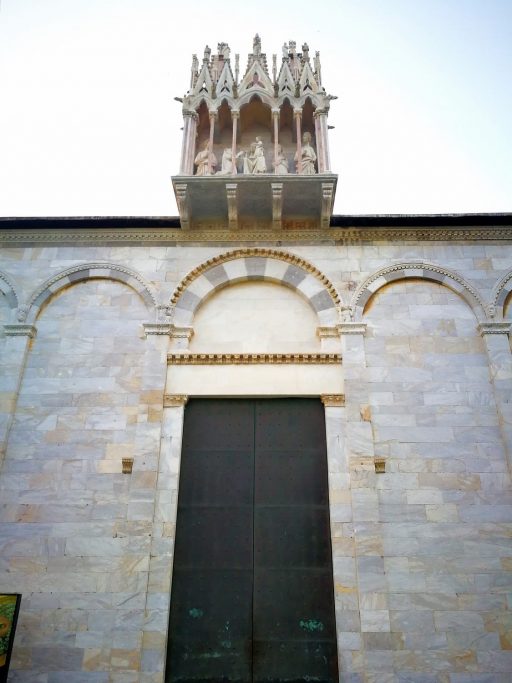 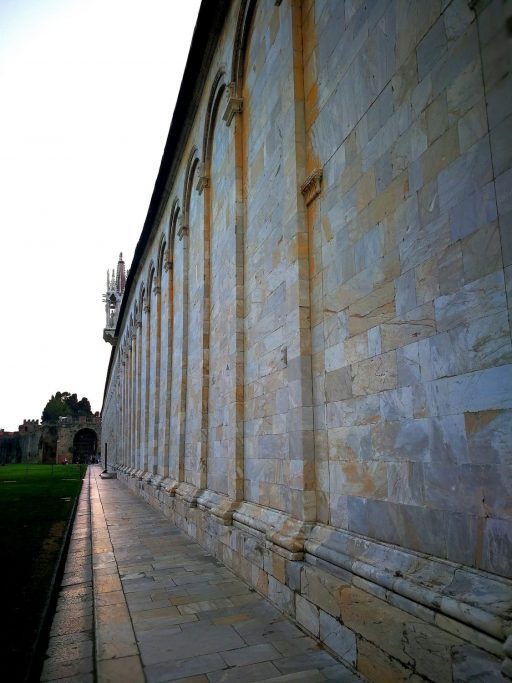 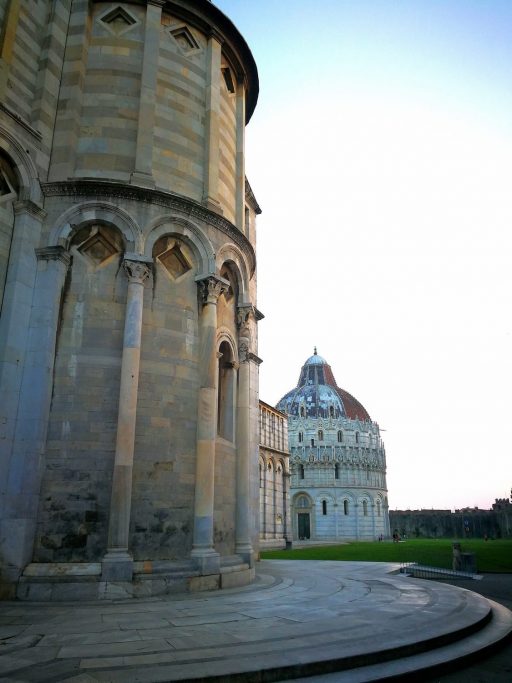 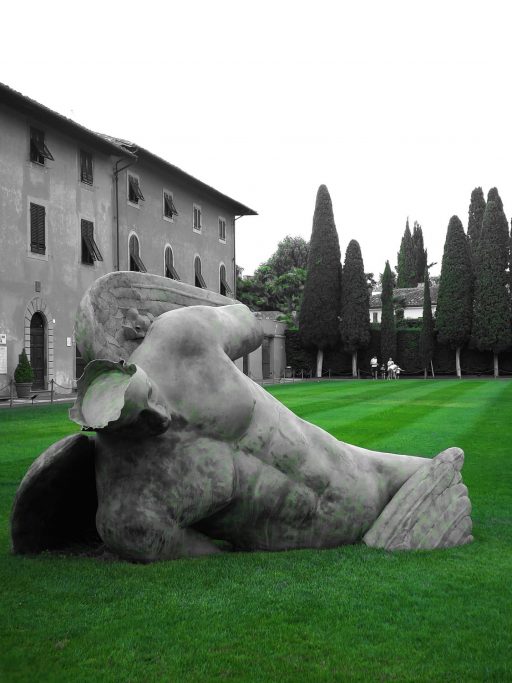 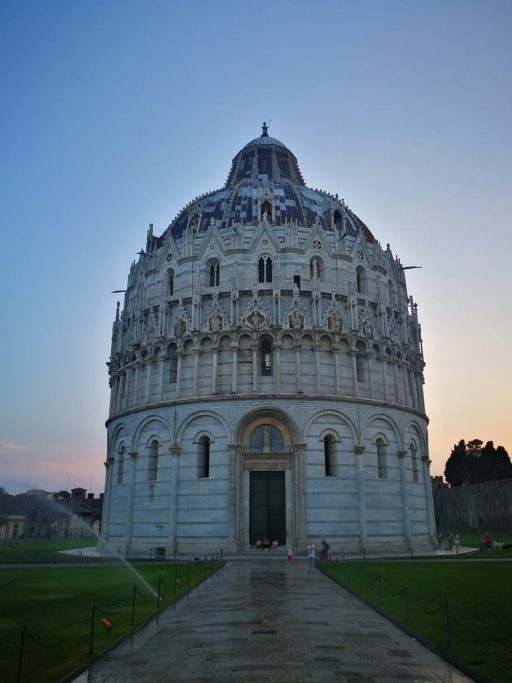 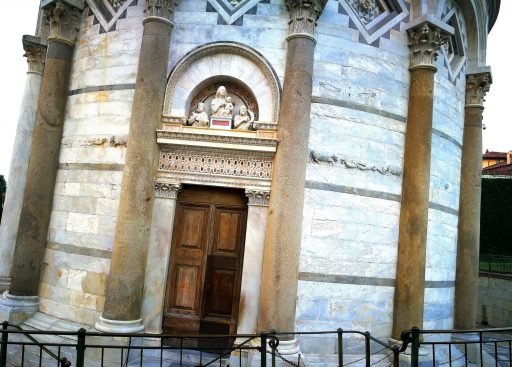 Trying to show the angle of the tilt for the leaning tower... 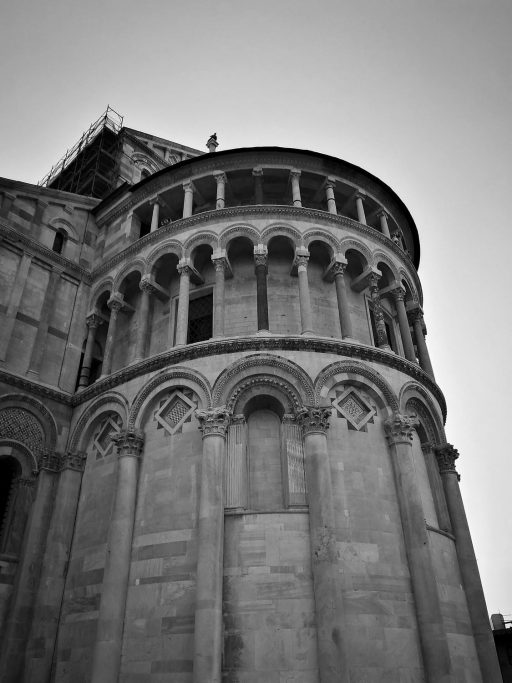 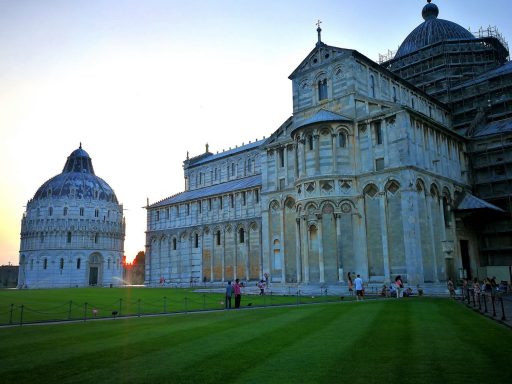 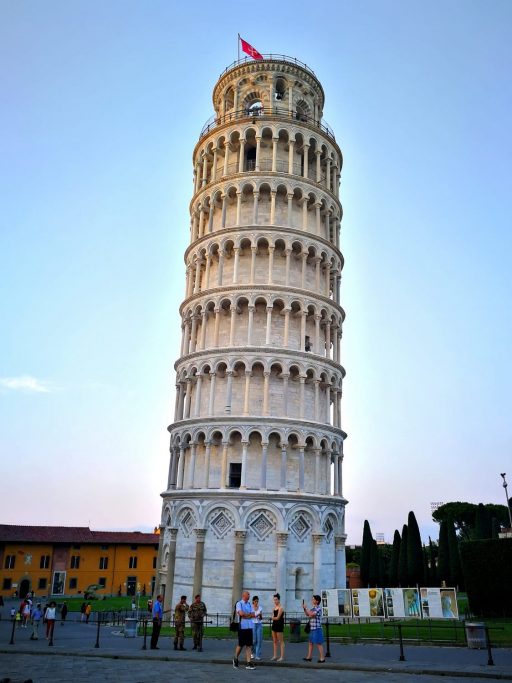 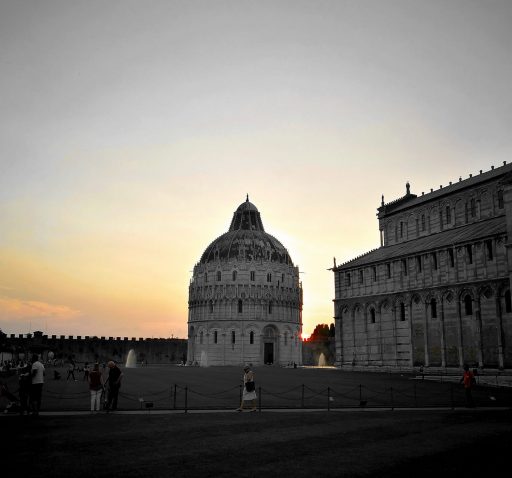 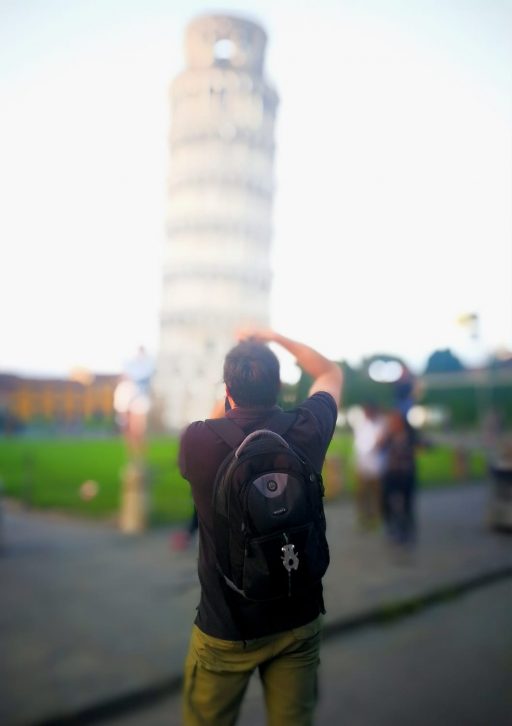 The stalking is ongoing....