The whirlwind tour of the UK continued with a super early morning drive to Eastbourne where my mom dropped me off for the first of many busses around the UK to see a few other friends before my time was up. We said our goodbyes, and it was a 4 hr journey along the south coast of the UK to Portsmouth.

Portsmouth was a pivotal place in my life….first time away from home, being independent, first love, first heartbreak, first formal education in art….very important years in my life…and I wanted to go back and see how things were, 28 years on. I had not revisited the place for perhaps 25 years. Now that the passage of time had rendered things largely emotionally neutral, it was pretty easy to see the place in an objective light, but emotions at the time were raw and hard-edged, and revisiting the place would have bought on too many ghosts.

If you’re interested in hearing what went down all that time ago, you can check out a 3-part blog entry here, about my first steps into love and the loss thereof.

Also, a fun remnant from around the same time is this video

Anyway, I was there primarily to meet a great friend from that time, who I hadn’t seen for perhaps 25, 26 years, Darren. He was a fellow art college student (he is in the above video somewhat briefly at around the 8.45 min mark, taking out the knife…).

Both of our studies were cut short at the time, mine because I left the city and went to another university, and his because he decided to go his own route and go further into his major passion, comics art, a move which somewhat paid off as he is still producing work, some of which you can see on his facebook page. I am still in awe of the guy who had the guts to leave higher education and pursue his dream job . It was a bold move that, while I wouldn’t recommend for everyone, worked for him.

Given the passage of time, our lives have diverted in radically different ways. I perused a primarily single existence, sacrificing the totems of stability for more experience and adventure in different places, whereas he has found a long term partner, and had a child.

We met up at lunchtime, and almost immediately, without any thought from my end, our conversation was turning to intimate and perhaps difficult subjects. It was odd, I had not even questioned the nature of our conversation, in fact, it felt like we were just picking up a half-finished sentence from long ago. I had to be reminded that this was the case, but it wasn’t much of an issue, it just struck me as funny that I had dived in to the deep end, rather than tested the waters before going deeper into a conversation.

I was juggling between catching up with my friend, and trying to get my bearings in the city. Some things jumped out at me as familiar ground, many things were not. At one point we took a detour and passed the art college, and it felt really….satisfying to see the building again, largely unchanged by time. Another landmark, the very location where my eyes first caught a glimpse of my first love, strange to see now, as if through HD vision, compared to some grainy old film of the past.

Conversation flowed, easy and bountiful. It felt comfortable, slipping in to old rhythms with my friend, while breaking new ground and adding a new chapter to the ongoing narrative. We didn’t really do anything that would be considered deep and meaningful, but it was nice catching up, and, like any enjoyable activity, over all too soon.

I think what is good about true, lasting friendship is that there is a certain reliability about it. The significant passage of time was just a blank space to be filled upon the next meeting, rather than a yawning chasm of misunderstanding and distance. The thread was easy to pick up, and it’s one that I hope is woven in to the future.

Another short meet-up, a quick evening in Portsmouth, enough to catch my breath, and then another early morning start, another bus journey, another place to see and catch up with another friend. Onwards to Glastonbury.

I thought that the travel was going to be relatively straightforward….a 4 hr bus journey, to a more local bus, for 1 hr 20 mins from Bristol to Glastonbury. However, this was one of the more problematic journeys in my trip.

I have suffered from motion sickness since I was a child. Most of the time either the journeys are short enough that I can easily control it, or the trip is smooth enough that I don’t feel it. This bus route was particularly rough though. Winding through the English countryside, stopping at every small town on the way, so any straight stretches were fractured by twisty-turny slow routes that would turn my stomach.

I tried moving to a less bumpy part of the bus, to no avail. I managed to survive to Bath, about 45 mins away from the final stop, Bristol, but by then, I was literally on the verge of throwing up, and couldnt take it any more. I left the bus one stop early, having calculated that I could actually get on the train from there and make it in to Bristol before the bus arrived, saving a bit of time, and the contents of my stomach. A victim from my somewhat hasty retreat from 4 wheeled transport was a pair of sunglasses I left on a seat, but it was a small price to pay to keep my food down.

I made it to Bristol, another vaguely familiar place in my personal history, as I lived in and around here while growing up. Off the train, and on to a regional bus route that was to take me through more countryside to Glastonbury.

Some would say this is one of the spiritual capitals of the UK. From a tourist perspective, it is certainly that. A large part of the place is built up around the new-age spiritual cash-in. The authentic ye-ole-world fairae shop here, the just-out-of-lord-of-the-rings prop shop there. One guy was selling home made wands on the street corner temporary stall. The residents are a mixture of millennial new age hippy types, tourists, and the elderly. This particular weekend was also the famous Glastonbury Music Festival, so it was busier than usual with people visiting that.

I was here primarily to meet perhaps my oldest friend, Caeli. He is a fellow creative type, having spent his years bouncing between the UK and US, Glastonbury being his latest place to settle. A different pace of life for him to recover and rebuild and get back to his core of creativity. He is an obscenely talented musician.

He maintains a small, but well constructed studio in a house that he shares with a local resident. I would spend the next 3 or 4 days there.

Unlike Darren, we had met a few years before, on my last visit to the UK, so our mutual frame of reference was a little more recent. We were able to catch up with each others’ narratives a little quicker, and found our easy rhythm quicker.

We went to a local cafe to grab some food and catch up, and I was pleasantly surprised to bump into his mother there by chance. I hadn’t seen her for many years, perhaps 30 or so, but really she hadn’t changed either. Still a ball of energy and giggles. We fell into an easy conversation about the passage of time and catching up.

After the meeting, it was back to the apartment, and more random conversation. The next day bought a great impromptu jam session in his studio, the fruits of which I hope to see in future. Then another friend I hadn’t seen in perhaps 10 or more years had traveled down to Glastonbury from Wales with her husband, Fleur, so we did the increasingly familiar routine of picking up narrative threads and joining gaps in our personal histories over food at the local cafe with Caeli’s mother.

For a fleeting moment, I am in a timeless bubble. A comfortable, warm, familiar place where you dont feel too old, too young, too fat. You can just let your guard and defenses down and just ‘be’ with people. To laugh and learn from people close to you, with a shared narrative. It is a rare feeling to be like this. I want to remember a moment where Caeli is in his studio, making music with Fleur, who is singing, her husband is sitting in the back garden talking to Caeli’s mother, and I am sitting in silence in the next room, alone, just drinking in the flow and happy with the connections we all have with each other. It’s a lovely feeling.

“A friend is someone who understands your past, believes in your future, and accepts you just the way you are.”

The final afternoon in Glastonbury and we climb the hillside to the top of a local landmark, the Glastonbury Tor, and I fly my drone around a bit, and grab some shots from the flight

A mellow evening with my old friend, and then it’s the familiar routine of packing and preparing for another cross-country jouney, this time northbound to see a school friend, Andi. 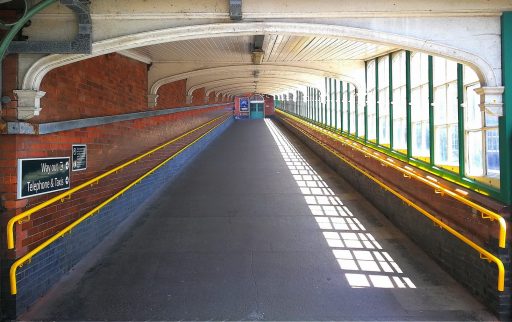 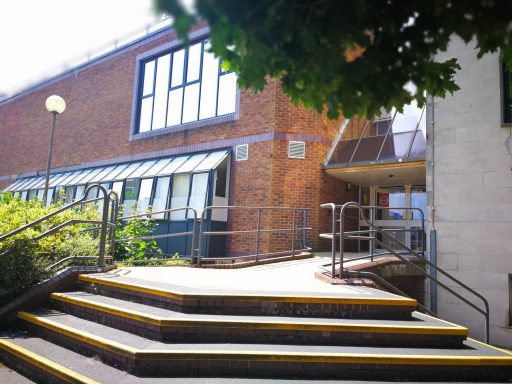 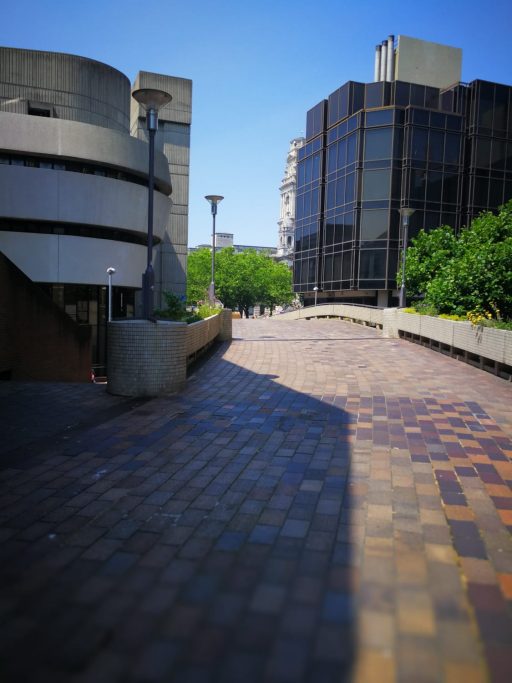 The place I first fell in love... 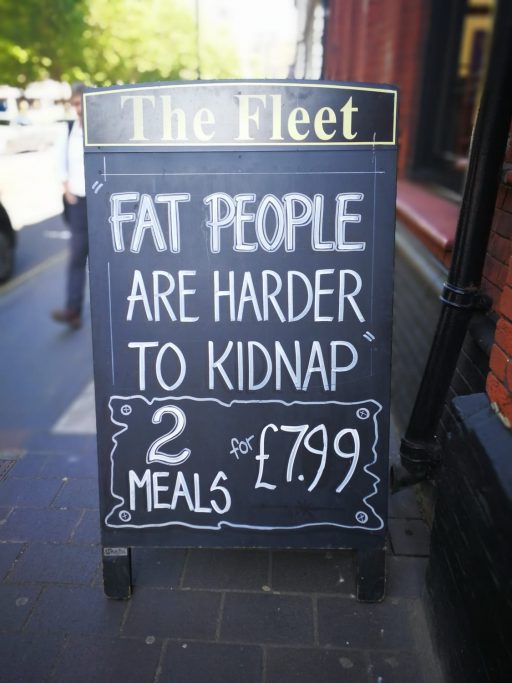 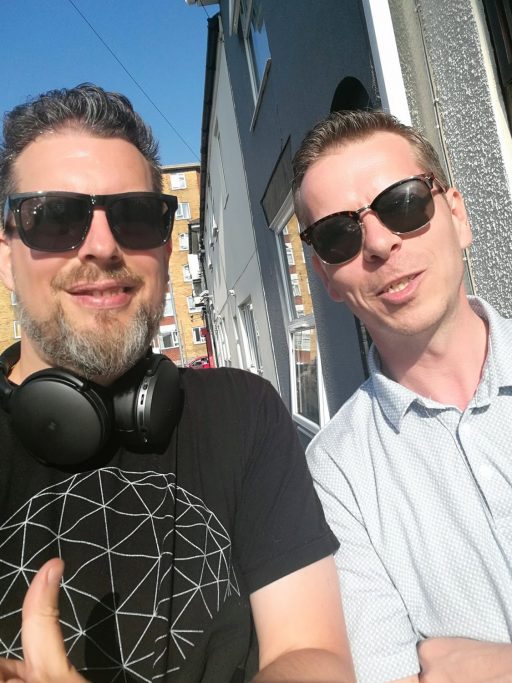 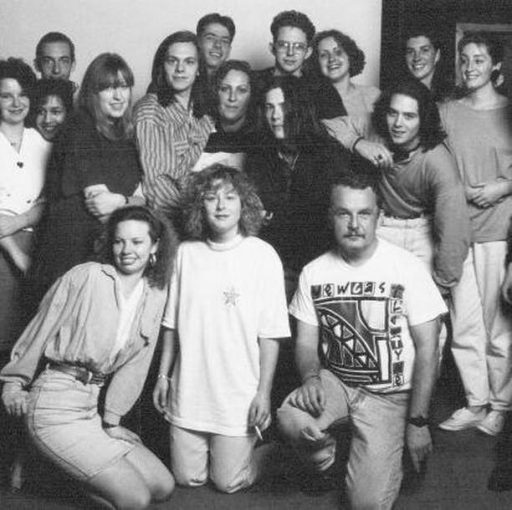 One of these women became my first love... 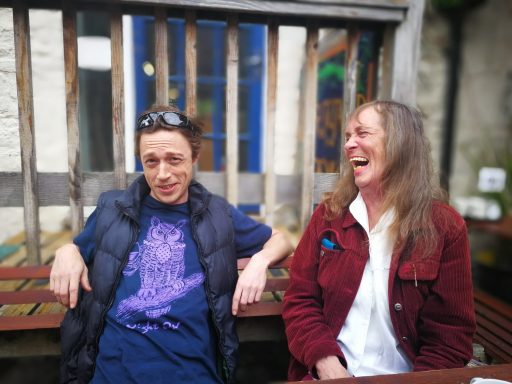 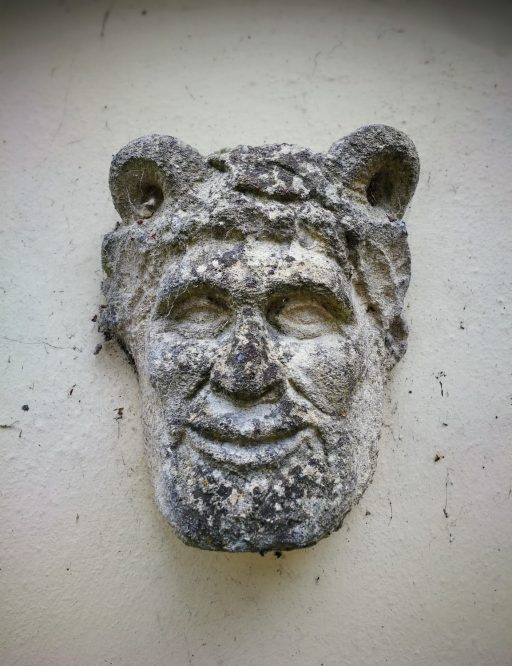 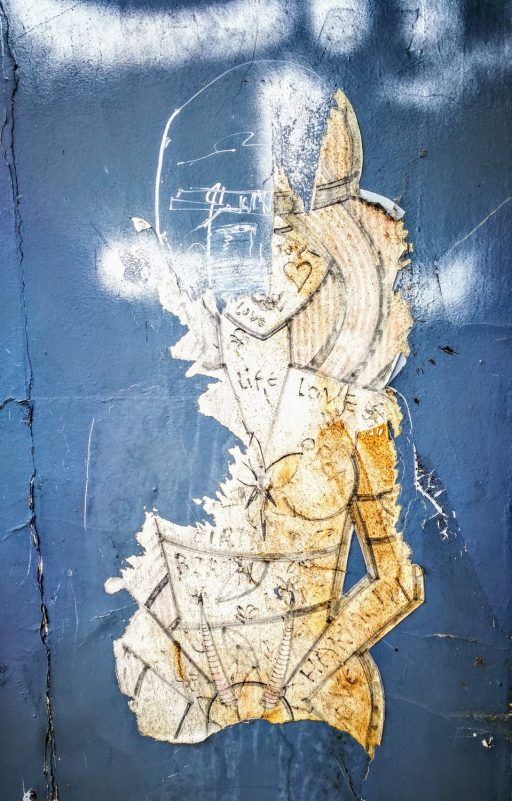 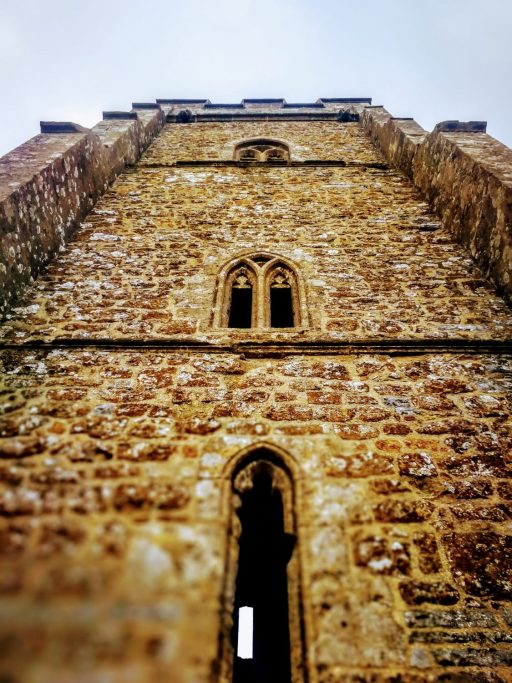 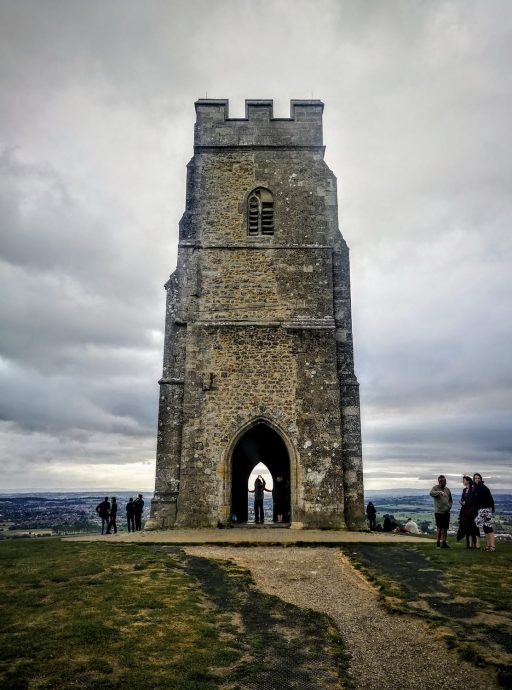 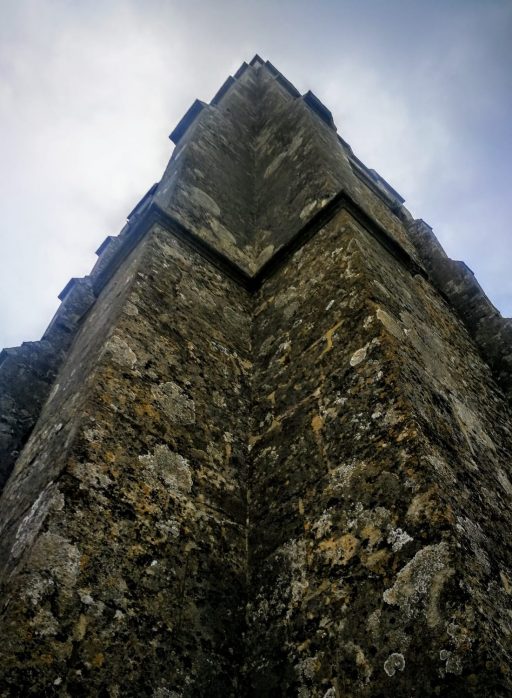 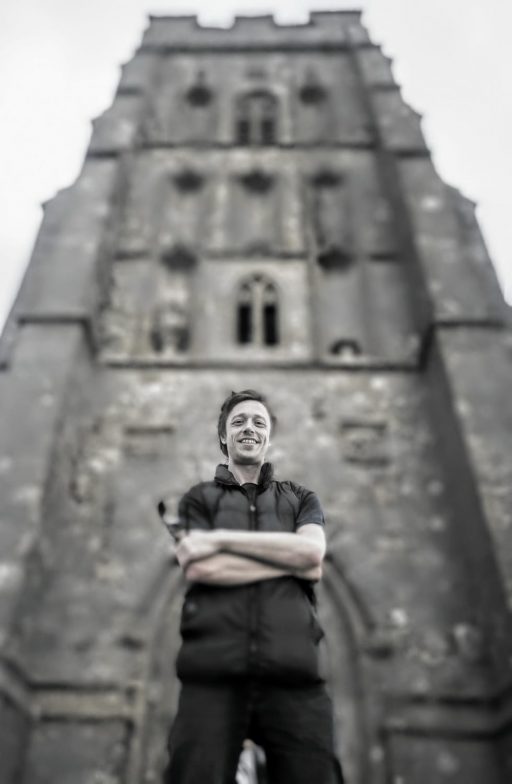 Caeli and The Tor 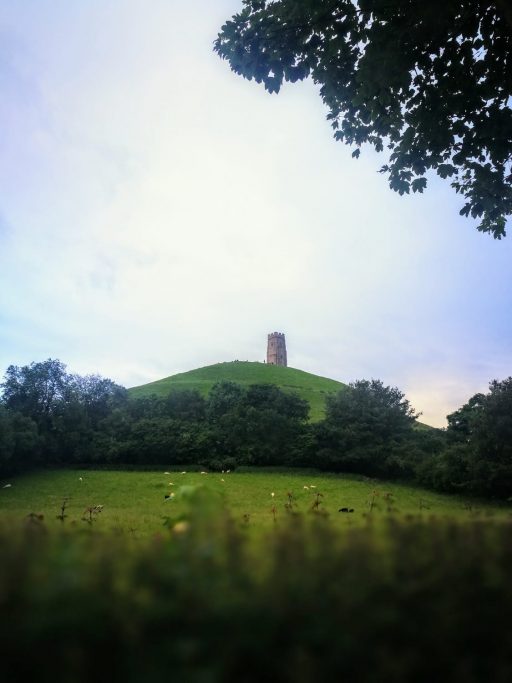 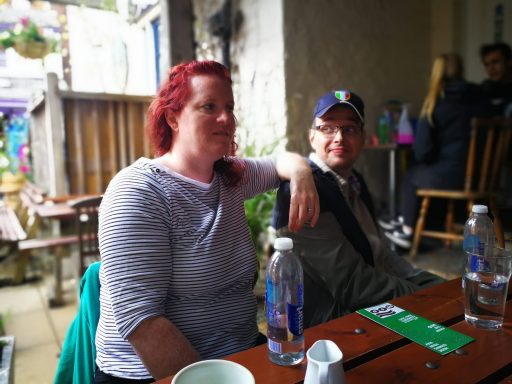 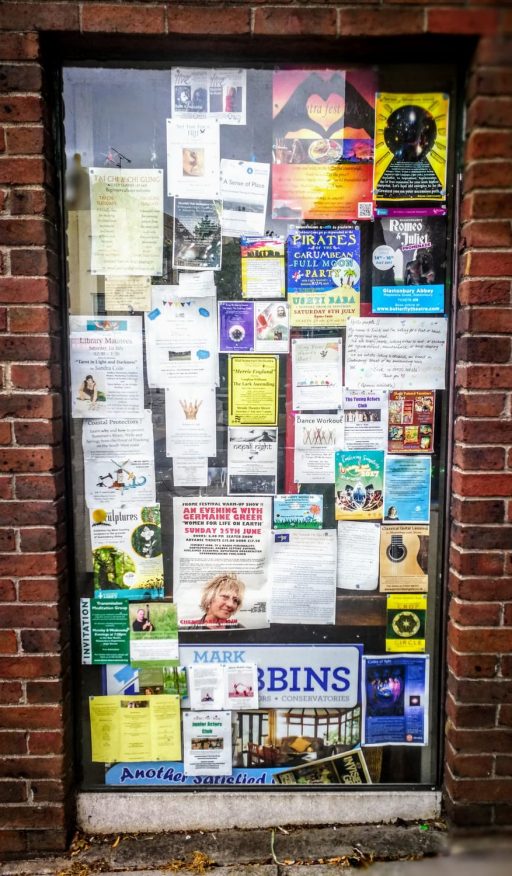