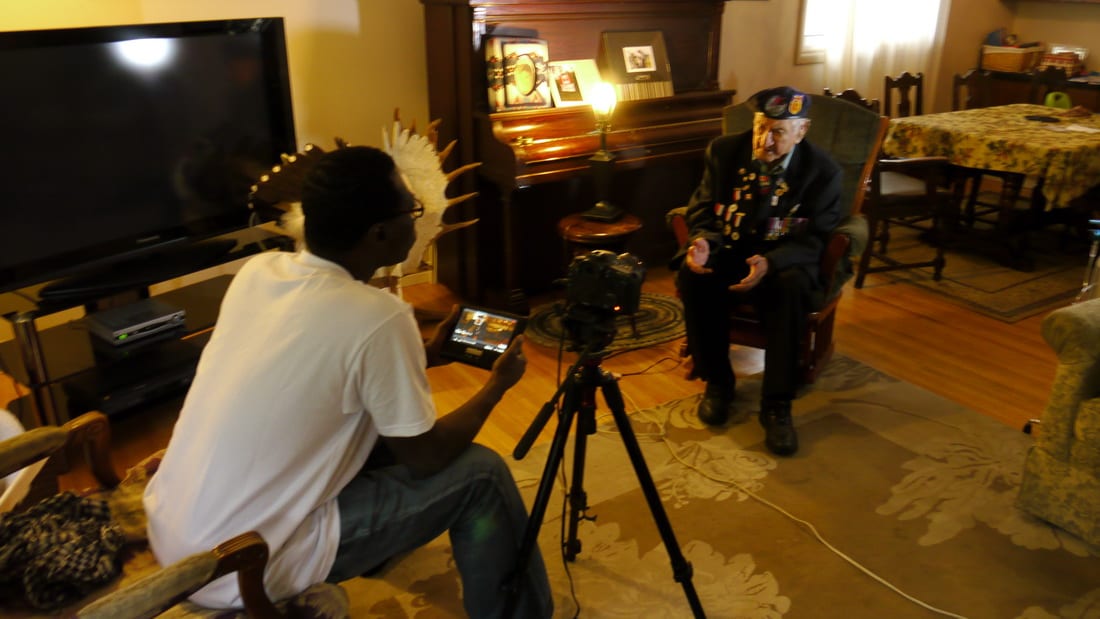 So, what am I doing here, 2000km west from Montreal, you might ask?

Well, this is day one of filming a documentary for my main client, Musa Kala. Over the past few months, we have been assembling the equipment, and lining up interview dates for his new documentary. He is interviwing WW2 veterans in diverse locations. I wont go into plot and details for now, as its still early days. Little details will come out in the descriptions as and when we go along this journey, and the full picture will come clear in time.

So, flew from Montreal, changed in Ottawa, then 3 hours plus on to here yesterday. It was an interesting beginning. I arrived early at the airport, ready to meet Musa, he turned up by taxi with the equipment, and we meet up, chat, and check in. Its then that he realizes that he left the tripod in the taxi. Its about 35 mins and counting until flight time, so he makes some frantic calls to the Taxi company, and the driver agrees to loop around and back to the airport to bring the tripod. We wait, and wait some more, nevous shuffles, awkward silence, etc, and its about 20 mins before flight time and the taxi isnt here.

With a lack of other options, Musa ushers me into the queue for customs, muttering something about ‘meet you in Ottawa’. I am bumped to the head of the long customs queue because of my lateness, and after an extensive search (I am carrying a flight case full of technical gear, looks super suspicious to customs types, im sure) I rush to catch the flight, as people are boarding.

My mind is racing at this point…what do I do? I have 15 dollars to my name, in my wallet, just my boarding passes to get me to Saskatoon, not even the return tickets…theres an empty chair next to me where my director should be sitting, on a full plane, getting ready to depart.

Then, movie style (should have been in slow motion with doves flying across the cabin, etc) a rather flustered Musa turns up with the tripod and his cases, beaming from ear to ear. I breathe a sigh of relief as he sits next to me.

As we take off, he fills me in with the details. It turns out that the next flight after that he was planning to get to meet up with me in my 2 hr wait in Ottawa was full anyway, so there wouldnt be another flight that day, so the meet-up plan would have been tricky to say the least. Anyway, we have the equipment, we are reunited, and on our way again. Musa smiles, blinking into the sunset as the plane takes off. ‘God is Good’ he says ‘God is Good’

Beautiful morning, ran along a trail, then a straight road that went on forever. Thinking about last night’s dinner conversation with Musa as we ran. he talked about films, stuff he’d missed, stuff he wanted to see. A long lost film-loving habit, taken over by kids and career and life getting in the way.

We talked about filming the doc, about what he wanted from the people he interviewed.

‘I want to bring out something they have never talked about. I want to talk about the war, but no death, dying, killing, thats all been talked about before. I want to know heir hopes, dreams, desires, what they wanted to achieve when they were soldiers, what had happened to them after the war, if they had gotten what they wanted out of life. For some, this may be the last opporunity they have to document their lives, their thoughts, so I want to bring something out that they perhaps have never talked about.’

It wont be easy, but it will be interesting to find out. So, for the next 2 days, taking all the camera equipment 2.5 hours, back and forward to an Indian reservation somewhere on the outskirts of our location, to interview two people about their memories. As for myself, I am still frantically learning how to use half of our freshly aquired equipment, so the first few days will be a mini-training program for me, getting me up to speed with a whole bunch of new stuff. We will see how it all goes