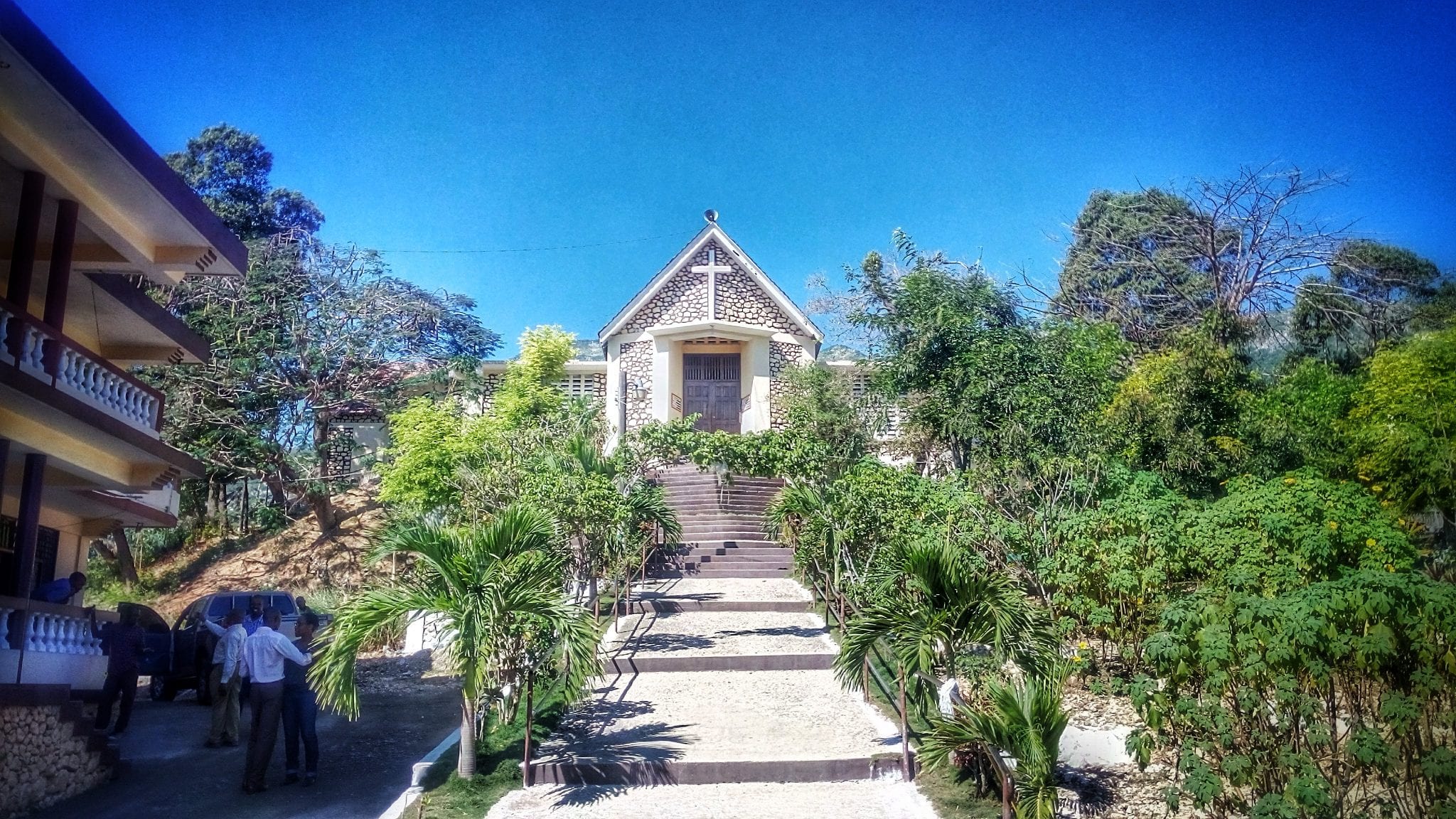 I don’t think I have ever flown for so short a distance, and yet come to a place so far away.
I set out from Miami International Airport having only slept about 3 hrs the night before. Head buzzing full of ideas, making sure I had effectively prepared for the trip, running through mental checklists of equipment, my brain simply didn’t allow me the luxury of a good night’s sleep.

The trip is from Miami, to the recently constructed Cap-Haïtien Airport (now called the Hugo Chavez International Airport…big name, small place). Until 2013, the only option for coming in to Haiti was to travel to the capital, Port Au Prince, and then travel outwards from there.
To give you an idea of the size of Haiti, well, it’s roughly the size of Belgium, for our European friends, and I would guesstimate for my British compatriots, that’s like the south coast of the UK, up to perhaps Milton Keynes, maybe a little further north, top end somewhere between London and Birmingham.

Anyway, I digress. So, the airport has recently been constructed to serve the people in the northern half of the country, and, as usually happens, where there is an airport, follows commercial traffic. American Airlines seems to have recognized the potential first, doing a daily 757 flight run from Miami to here, flight time a paltry 1 hr 20 minutes. Enough time for wheels up, the leisurely consumption of plastic snack packs, and descent to the city. They didn’t even start offering this route until October 2nd 2014, so you can imagine this is a whole new way of travel for people to get to this country.

As far as I can tell, the AA flight is the only daily incoming international jet, the rest of the airports’ traffic is smaller prop driven internal flights. I would guess perhaps connection flights to the Dominican Republic, the country which shares the other half of the island across the border, but I couldn’t be sure.

The contrast is stark…wheels down, and there’s no airport traffic…no multiple terminals…on to the tarmac, and there’s a couple of airport buses to take the people to the terminal. Which is smaller than the jet itself, and walking distance from where you disembark.

First. It’s hot. Not oppressive, a dry heat, which means the shade gives a welcome relief, but in the magnified heat of the runway tarmac, it’s pretty bad. I have traveled from the snowy north, -20C and snow when I left, to 30C on arrival in 24 hrs, and I have to dress appropriately for both, which means dressing somewhere in between the two climates, not ideal for either. This means jacket over the arm. I look appropriately touristy. Ha.

I had packed as light as I dare, the majority of the room taken up by camera gear, and enough clothes to scrape by for the 5 days I am going to be here, and that’s literally about it. This meant I was allowed to travel with carry on luggage only, no waiting for luggage from the flights.

The flight was close to full, and we stagger out onto the tarmac and into the welcome shelter of the small terminal, past all I can describe as a kind of Haitian mariachi band outside the terminal to welcome us. It was, at least for me, an odd sight.

Into the terminal, perhaps 5-10 foreigners on the whole flight who need to go through international check in, where I encounter my first problem. There’s a sign next to the passport control desk, 10 USD to enter the country per-person, and I have no cash on me. I spent the last of my change in Miami at the airport, not knowing I would need cash upon entry. I have had to pay at airports before, but always on the way out of the country, rather than up front.

I show the customs officer the sum total of around 60 cents in my pocket, attempting to explain that I only have cards. He does not look amused.

After an amount of panicking, the man behind me in the queue fronts me the money (thank you, benevolent mystery lifesaver) which I pledge to repay once my compatriots meet me outside the terminal.

The majority of passengers are waiting the other side of customs for their baggage, so I am one of the first to hit tarmac out of the terminal. I exit, blinking into the sunlight, looking about as lost and touristy as I can, as I am swarmed by local taxi drivers offering their assistance. A number of polite and not so polite refusals later, I look around, and to my slight consternation, fail to see any sign of the people that are going to pick me up.

I scan the road around the terminal, and wait in a kind of shelter, welcoming the temporary relief from the heat as I gather my thoughts. Are they coming? They do know I am here, right? I have a contact address, but no phone number…should I go there myself?

The minutes tick by…agonizingly slow. People eye me suspiciously, offer more services, which I refuse with a hint of desperation. Here I am, alone, in a strange world, pennies in my pocket, isolated.

Before my thoughts can turn darker, my compatriots turn up, and I breathe easy. I grab 10 dollars and return to the terminal to pay the man that helped me, and pop back outside to a waiting SUV. The taxi ride offers fade as they can see my ride has shown up. All becomes right with the world once more.

I introduce myself to the members of the vehicle, drop my luggage in the back seat, and proceed to split my jeans stepping up into the SUV cabin. Not the greatest of starts to my Haitian adventure, especially as those are my only pair for the entire trip.

So, the SUV contains Leticia, a nurse from NY, her mother-in-law, a nurse turned lawyer, who runs a non-profit organization in a catholic school in the city (more on that later) and the driver, who it turns out used to be the head of the city port.

We make our greetings, and the SUV pulls out into the flow of the city traffic. The driver takes a slow, scenic tour of the waterfront, and parts of the city center, while I begin to film footage. He drives through the port he used to work in, and I am urged to lower my camera, as we meet the first armed police. A lone officer, with a rusty, aging shotgun, who, recognizing the former port owner, waves us through.

We pass congested, bustling streets, packed with scooters, improvised cabs, market stalls…not unlike many parts of Asia, especially reminiscent of my time in China. I feel not-so-far from my comfort zone again, and begin to enjoy the journey and soak things in.

The city is criss-crossed with a crude irrigation system, now nothing more than an open sewer, filled with everyday garbage. They tell me here when it rains, nobody goes out in fear of the water system flooding and running sewage in the streets…I remember my time in China when the streets did exactly that, a particularly concentrated period of rain where the inadequate street drainage system backed up, and suddenly you found yourself quite literally, ankle deep in liquid shit. Not a particularly sterile environment, so I can understand why people stay at home in heavy rain. 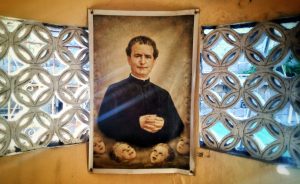 We arrive at my new home from home for the next 5 days, a catholic church in a small gated community with a school and rectory called the ‘Paroisse Saint-Jean Bosco’. John Bosco (or more popularly known as Don Bosco) was around in the late 19th Century, and established a network of Catholic missions to help the poor. His legacy lives on throughout the world. (Find out more HERE).
They provide a basic but effective walk-in clinic where they can administer medical aid, with a small pharmacy attached to the clinic, and a small school on the grounds for education for a range of different ages. The team administers the medical support in the mornings, and provides education services in the afternoon.

In the complex, at the top of a hill, lies the church, the focus of the monastery, further down, the housing section, the school and clinic, plus a new small clinic under construction. We are in a kind of gated community, shielded to an extent from the city itself. I am the only white guy here, and with the addition of my camera gear, I tend to stick out somewhat, but I am used to my fair share of awkward moments from my time in China. What I find more intriguing though, are the aid workers, despite being dark skinned, and from here, even having the required language skills they have been told to stay on the property at all times, so there is little or no sightseeing for them, much to their disappointment. Although I see little evidence that there is any danger here, I expect the organization have no desire to be responsible for any potentially dangerous situations to arise from a few strays let loose into the community, so to speak.

As for the amenities….here I lie, in a shared room with Laeticia’s cousin, another of the aid workers here (this particular organization is a family affair, at least on this trip). It’s hot….no internet, wi-fi, intermittent power outages, and one functioning shower among the group. Because we are in a church compound, our day will start around 6am with church bells and a morning service, and usually end early, around 9pm. I am running on around 3 hrs sleep from the night before, and a weeks worth of not enough sleep, since I only discovered I would be doing this trip on sunday night, I have been running around since, preparing for it. 5 hrs sleep so far tonight brings me to a mosquito filled darkness…my saturday will begin in around 3 or 4 hrs with a church service to film.

Previous Week One
Next Haiti – Day Two – Church and State